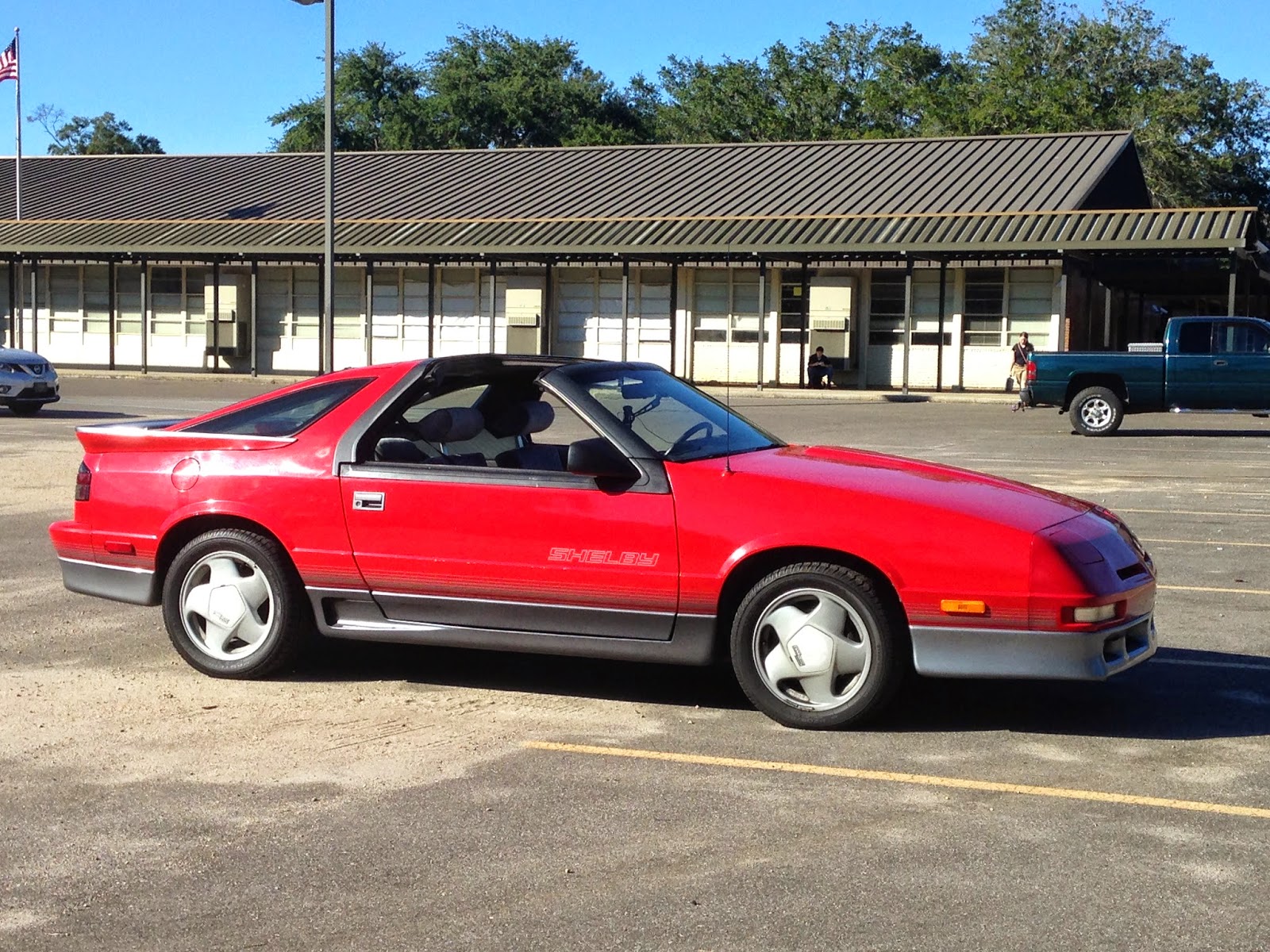 The '89 Daytona Shelby in the parking lot of my wife's school.  I love this car.  So much fun to drive, so much aggravation (sometimes).  Every day you learn something new about it like how to set, arm and disarm the factory alarm (see previous entry).

Every day, something new is learned like take for instance the fact that little did I know that right after I shut the Daytona off the Underwear Gnomes from "South Park" magically appeared under my hood and took their little gnome knives and cut one of my fuel lines. 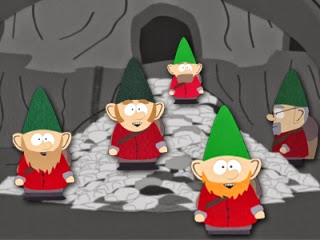 Not only do these little guys steal underwear but
they also cut fuel lines when you're not looking.

Yes, unbeknownst to me (that's a big word not often used), a high pressure fuel line had just cracked under the hood and as soon as I restarted the engine high pressure fuel would just spray all over the underside of the hood and all over the engine.  I learned this.  The hard way.  This was the lesson the Daytona taught me at 3:30pm on a Friday afternoon at my wife's school.

Life is funny strange like that.  Yes, it is, which is what keeps life interesting.

My '86 Pontiac Trans Am and my '89 Daytona Shelby have two different mechanical personalities.

The '86 TA is like "Well, I've run perfectly for a whole year now. I wonder what 28 year old part I can break that will strand Christopher on the side of the road?"

The '89 Daytona is like "Well, I've run perfectly for a week now.  I wonder what 25 year old part I can break that will strand Christopher on the side of the road?"

So ... I'm off on Fridays.  I drive the Daytona to my wife's school to pick up my two daughters after school.  I park the Daytona, take the T-tops off, roll the windows down and wait on my daughters to come out so I can take them home early.  After about thirty minutes, my daughters come out, I pack their school gear away in the hatchback and we're off to get an after school snack.  I get my girls in the Daytona, I get their school packs and band instruments stowed.

I start the Daytona.

My oldest daughter comments on this.

I drive out of my parking spot and two parking spots away where my wife is loading her things into her car.  The gas smell is still there only not as strong.  I'm thinking what it could be ... my daughter comments on the gas smell and my wife says she smells it as well.  Then my wife looks back to where my Daytona was parked and says that there's a dark spot where I parked the car.  I drive two parking spots back over, park beside the spot, get out and look at it.

I run two fingers through it, greasy, dark.

I go to my knee and look under the Daytona.

Something is pouring out from under the right front passenger side of the engine bay, puddling below the Daytona.

I reach in, pull the hood latch and pop the hood and this is what I get to see ...

So, yeah.  Glad this fuel leak happened in the parking lot and not at 70mph on the highway after some spirited driving.  Spraying raw fuel on a hot engine, hot exhaust or a red hot turbocharger is not a good thing ... it's more like a recipe for a fireball. 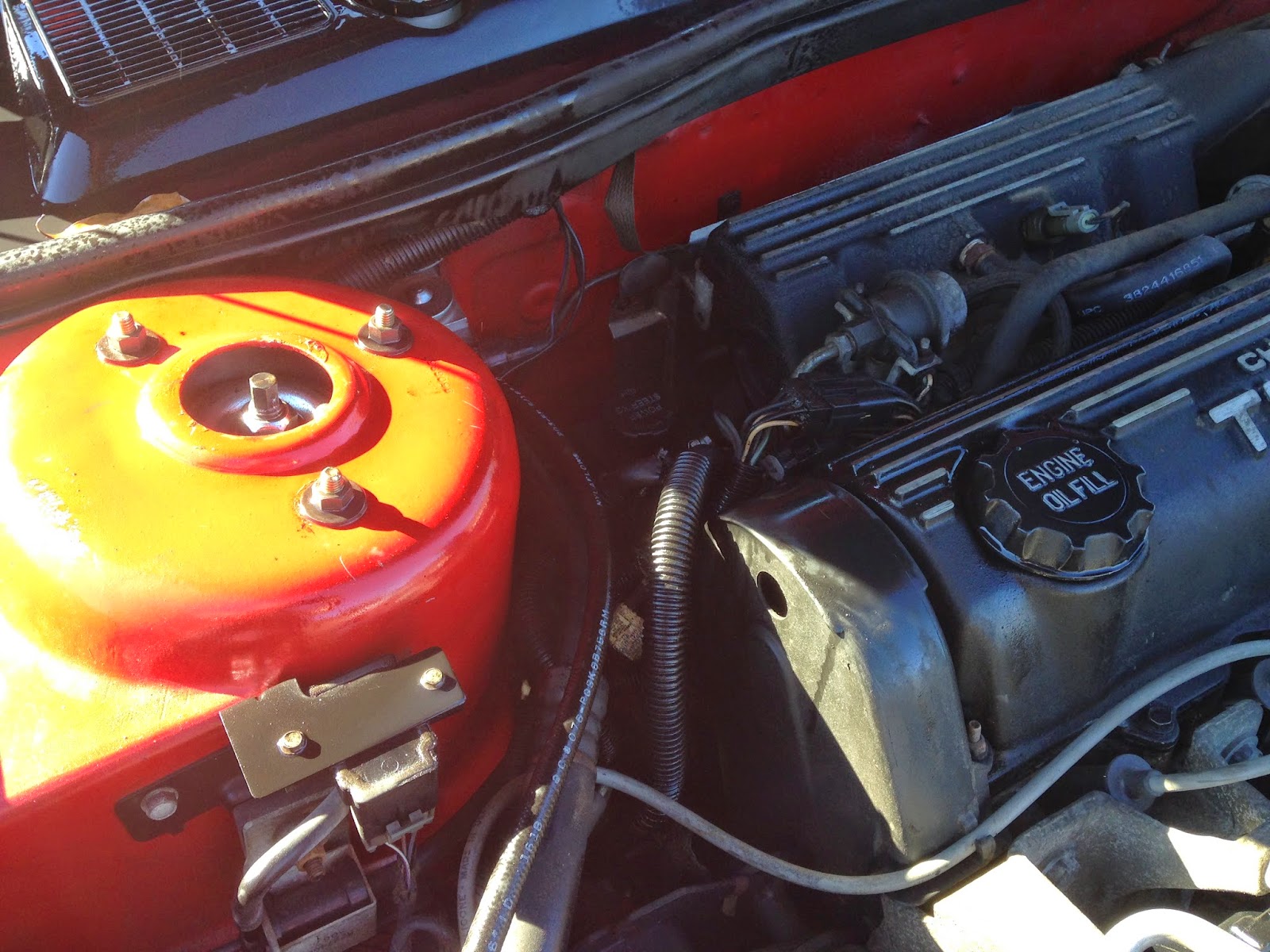 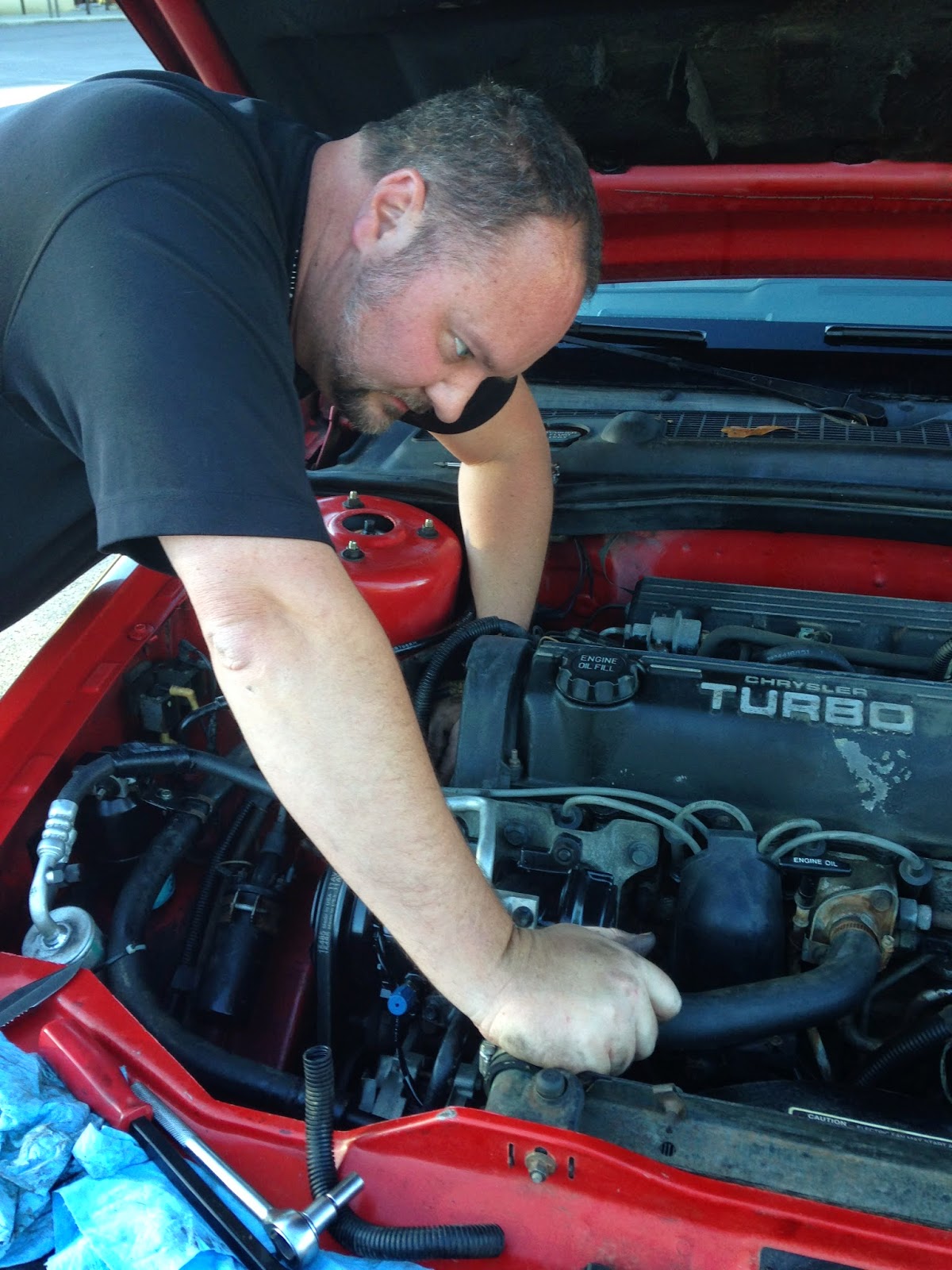 Cough, please.  The fuel line that ruptured is in a pretty tight place.  Not hard, just ... tight.  You have to worm your way into it with both hands and use just your fingers to try to wriggle the rubber fuel line off of the hard line.  Get out your big box of 64 Crayola Crayons and color this "Tedious Chore". 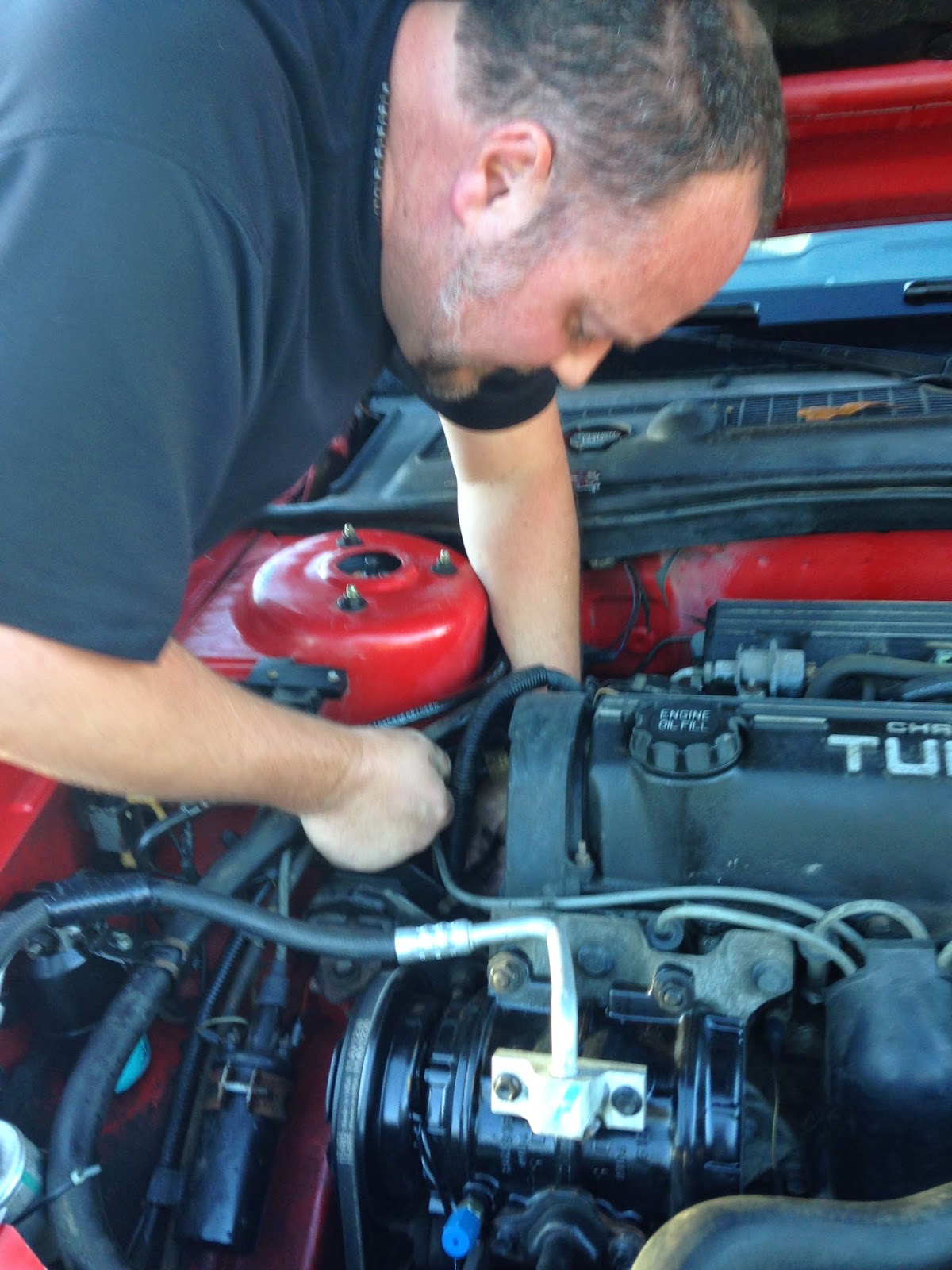 Yours truly hard at work on one of his toys.  My oldest daughter has gotten my iPhone 5c and is just snapping away with the pictures.  It could have been worse.  A lot worse.  This is an easy fix.  I probably could have done it with my Gerber multi-tool on the side of the road but I didn't want the aggravation so I ran home and got my small ratchet set and a small pry bar ... and a roll of shop towels and a bottle of Fast Orange hand cleaner. 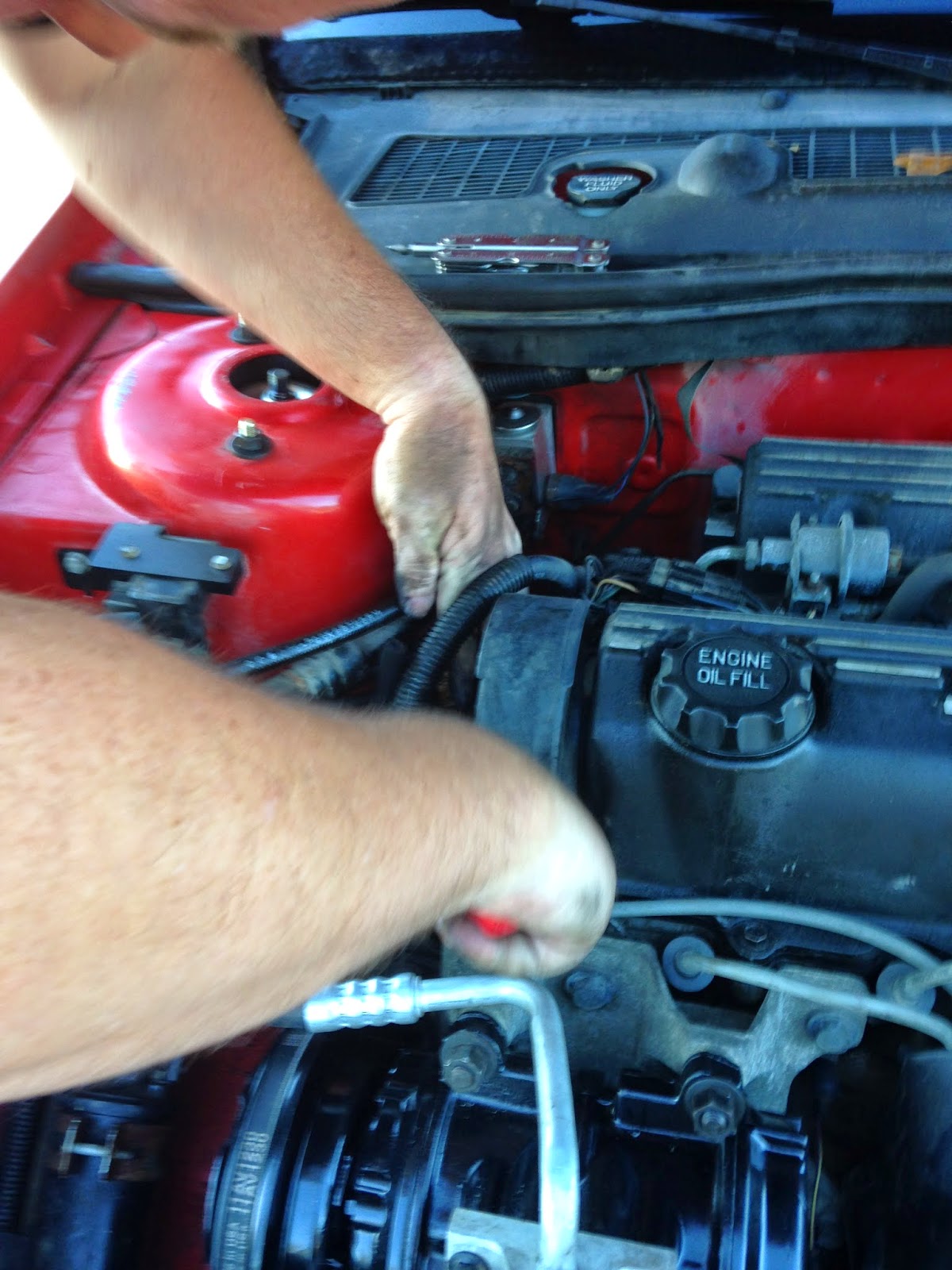 Fresh blown fuel and old engine grease makes for a wretched mess on your hands. 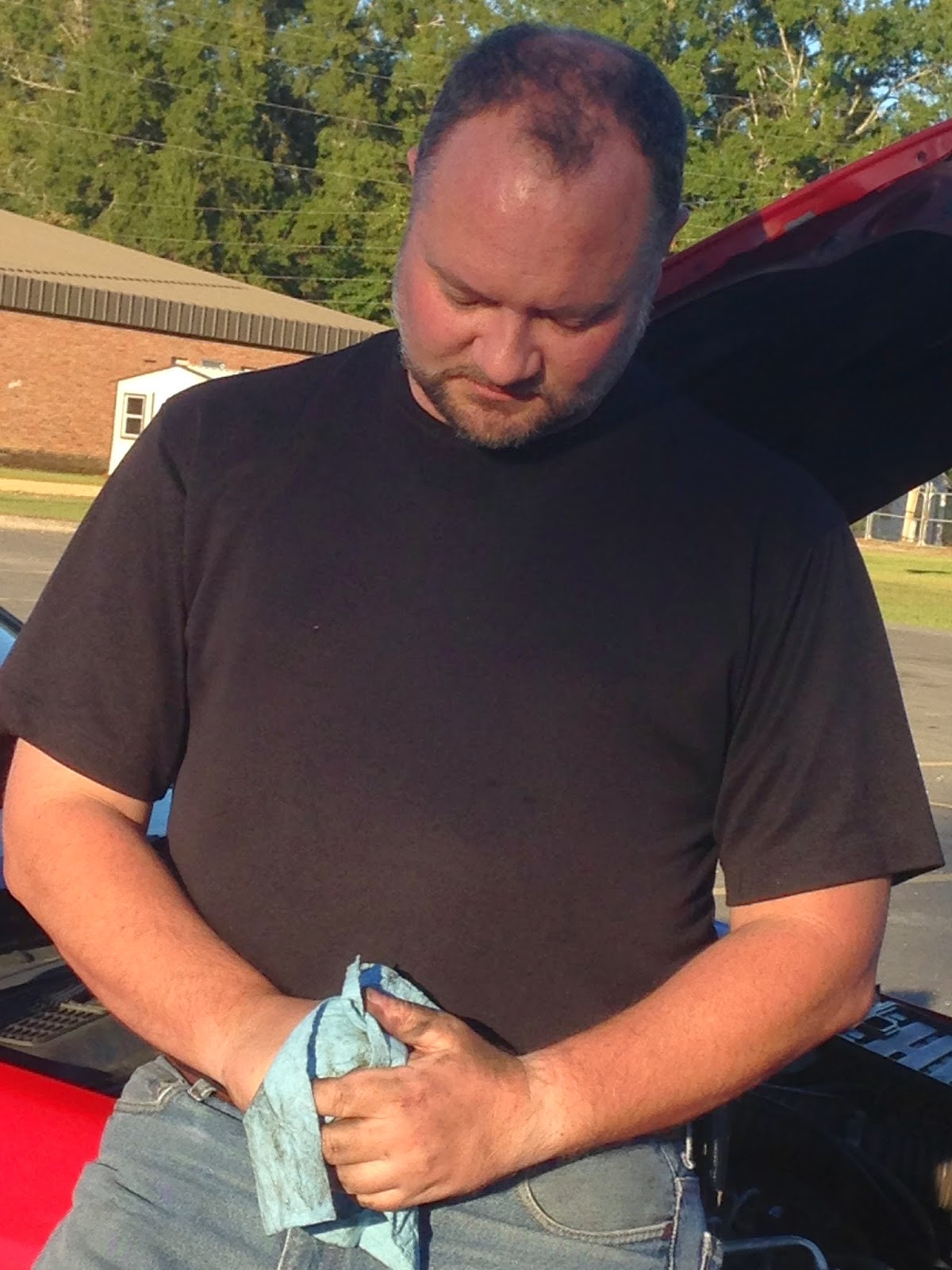 Cleaning up afterwards, best I can with some Fast Orange and shop towels. 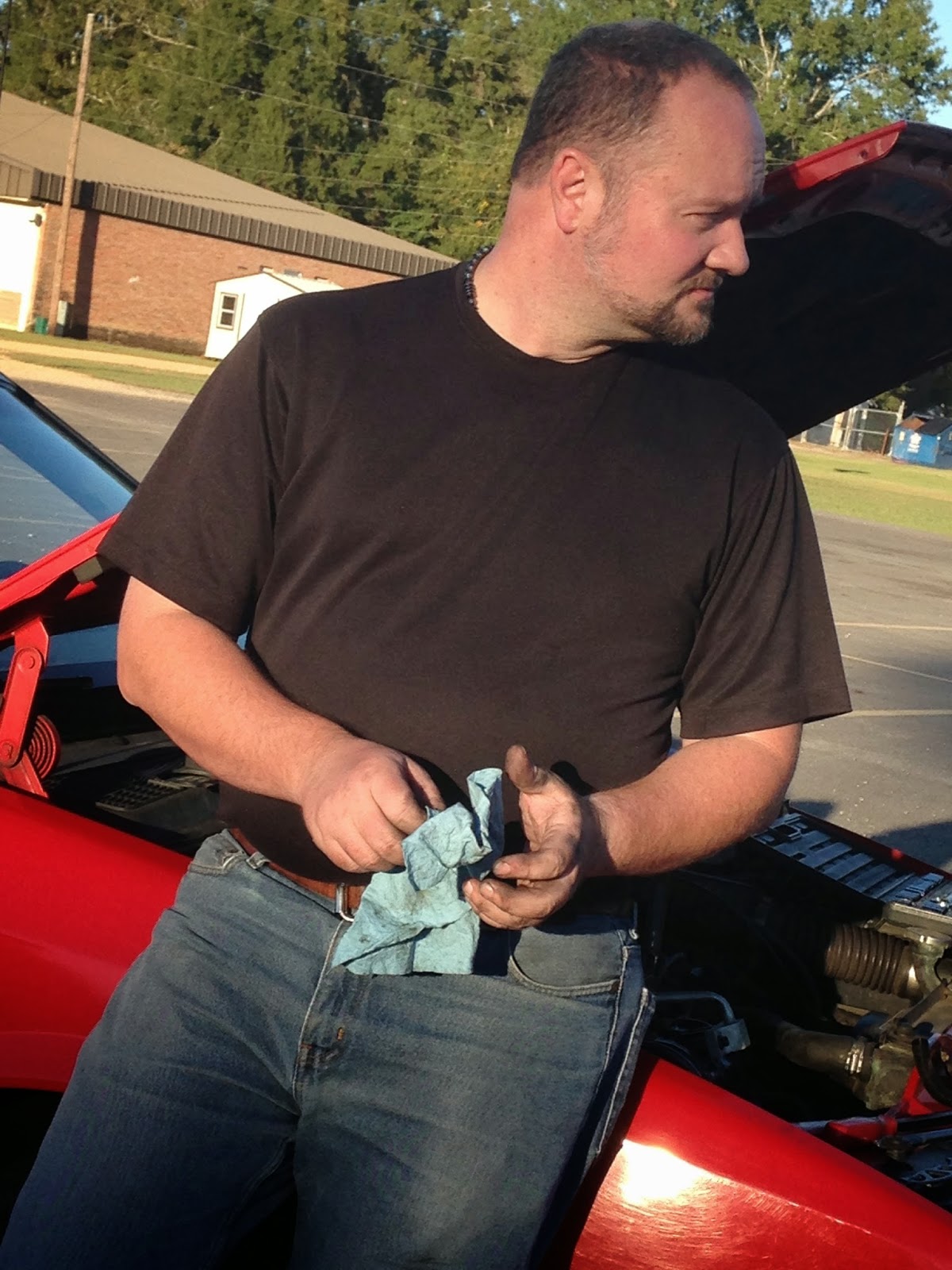 The next few pictures can only be described as ... "Sigh." 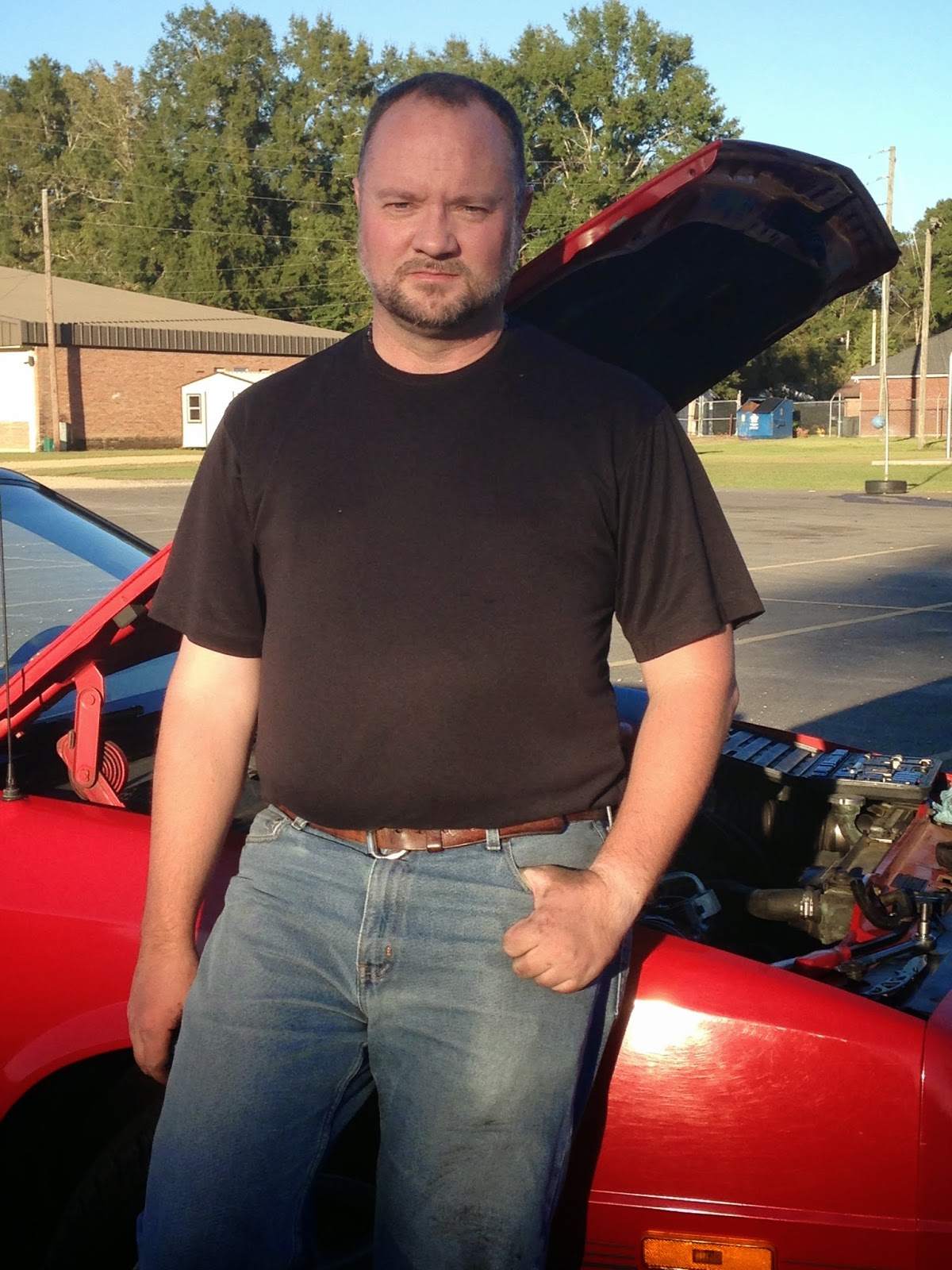 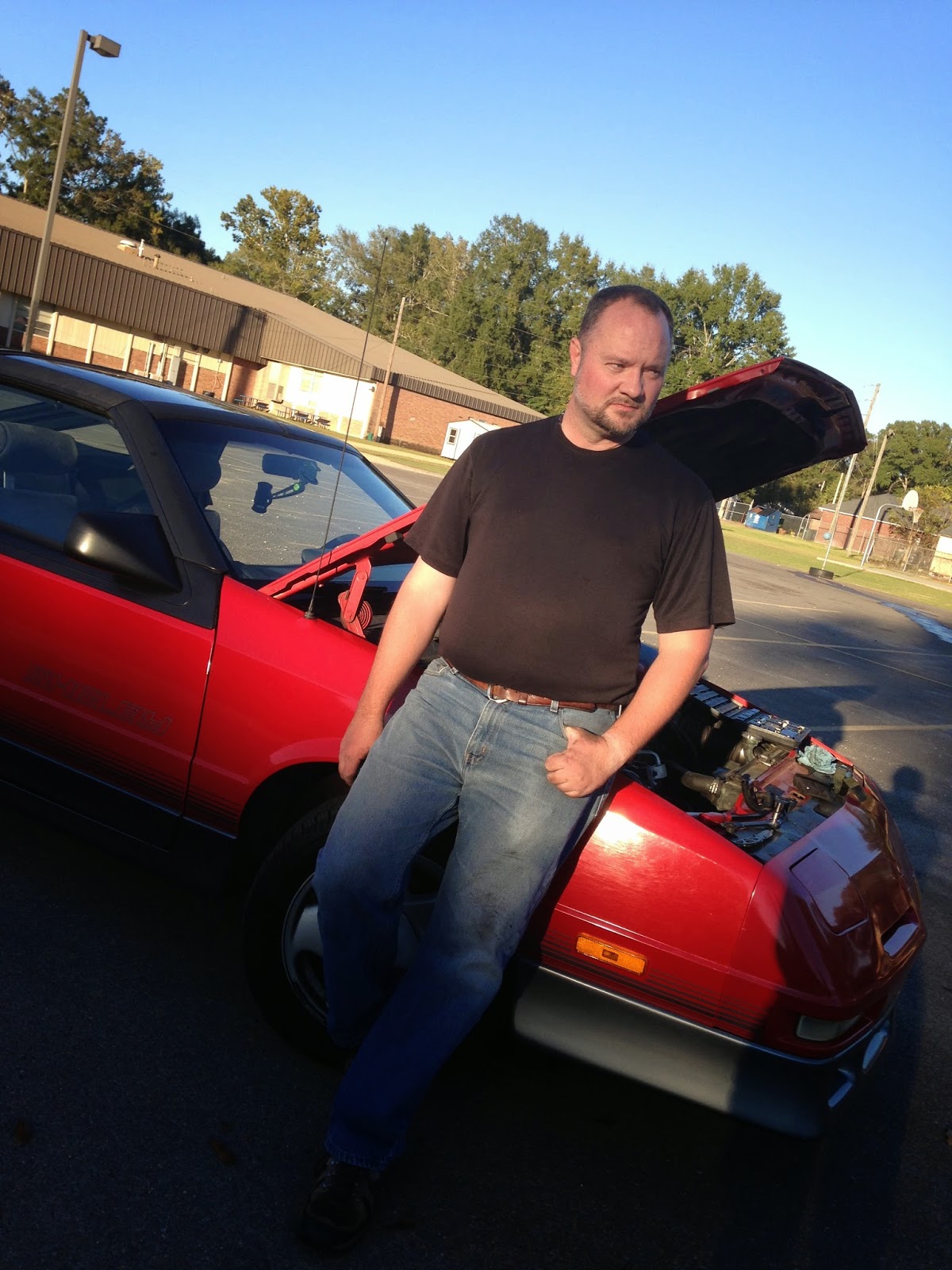 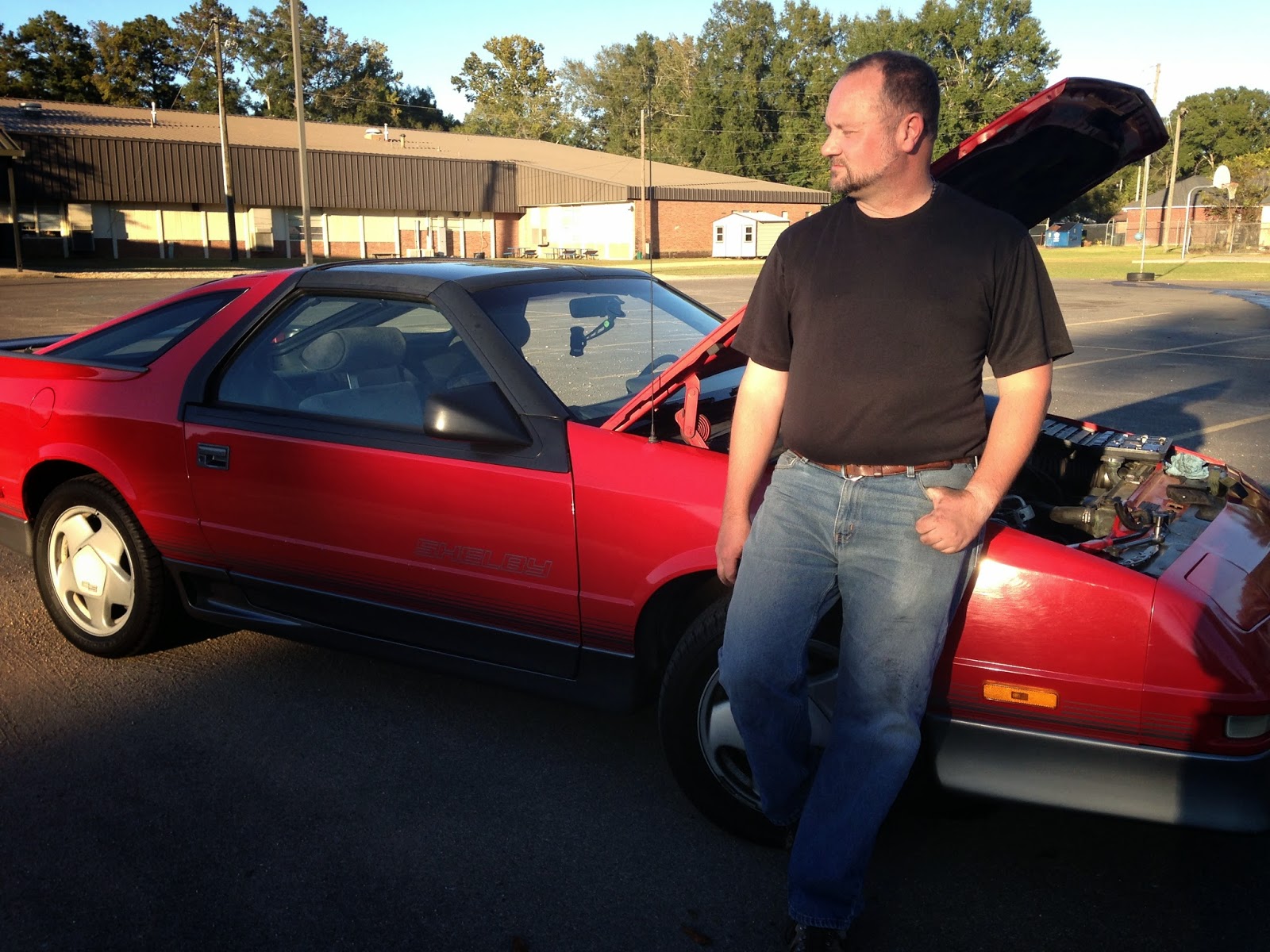 Back running and only half the vocabulary of a drunken sailor on shore leave used while replacing the fuel line.  Just another entry in the 1989 Dodge Daytona Shelby diary.  I love this car.

She hates me but I love her.

It's almost like a marriage, with kids.  Yeah, if they made a sitcom about me and my turbo Dodge it would have to be written by the same people who did "Married.  With Kids" and it would follow along the same lines only I'd be "Al Bundy" and the Dodge would definitely be "Peg Bundy."