We woke up at 7am and started getting ready for the trip back.  The hotel had a free breakfast so we took advantage of that and agreed to stop on the other side of Houston for lunch.

We loaded up the Lincoln and the Daytona, checked out of the hotel and I took the T-tops off of the Daytona, storing them in their protective bags in the rear hatch area.  The weather was overcast but getting hotter.  I prepared myself for a half-rough kind of day ahead and prayed again that we got home without any problems.

I sat in the Daytona, buckled up, set up my Garmin NUVI, pulled on my driving gloves and keyed up my Ipod.  This was my first turbo Dodge that had T-tops.  The T-tops were much smaller in area than my '86 Pontiac Firebird Trans Am, a lot lighter in weight but the effect of having them off with the windows rolled down was nearly the same as the Pontiac.

Homeward bound, the other half of the adventure and the half that might be the hardest part, still lies ahead.  I have to go nearly 700 miles in a 25 year old car the mechanical condition of which the previous owner can only vouch for.  Without knowing the Daytona, without having done any maintenance on it myself it's going to be a gamble but I'm a betting man.

The '89 Dodge Daytona Shelby and the '99 Lincoln Towncar (chase car) pulled over on the side of a Texas highway for a little driver to driver chat before we hit Houston. 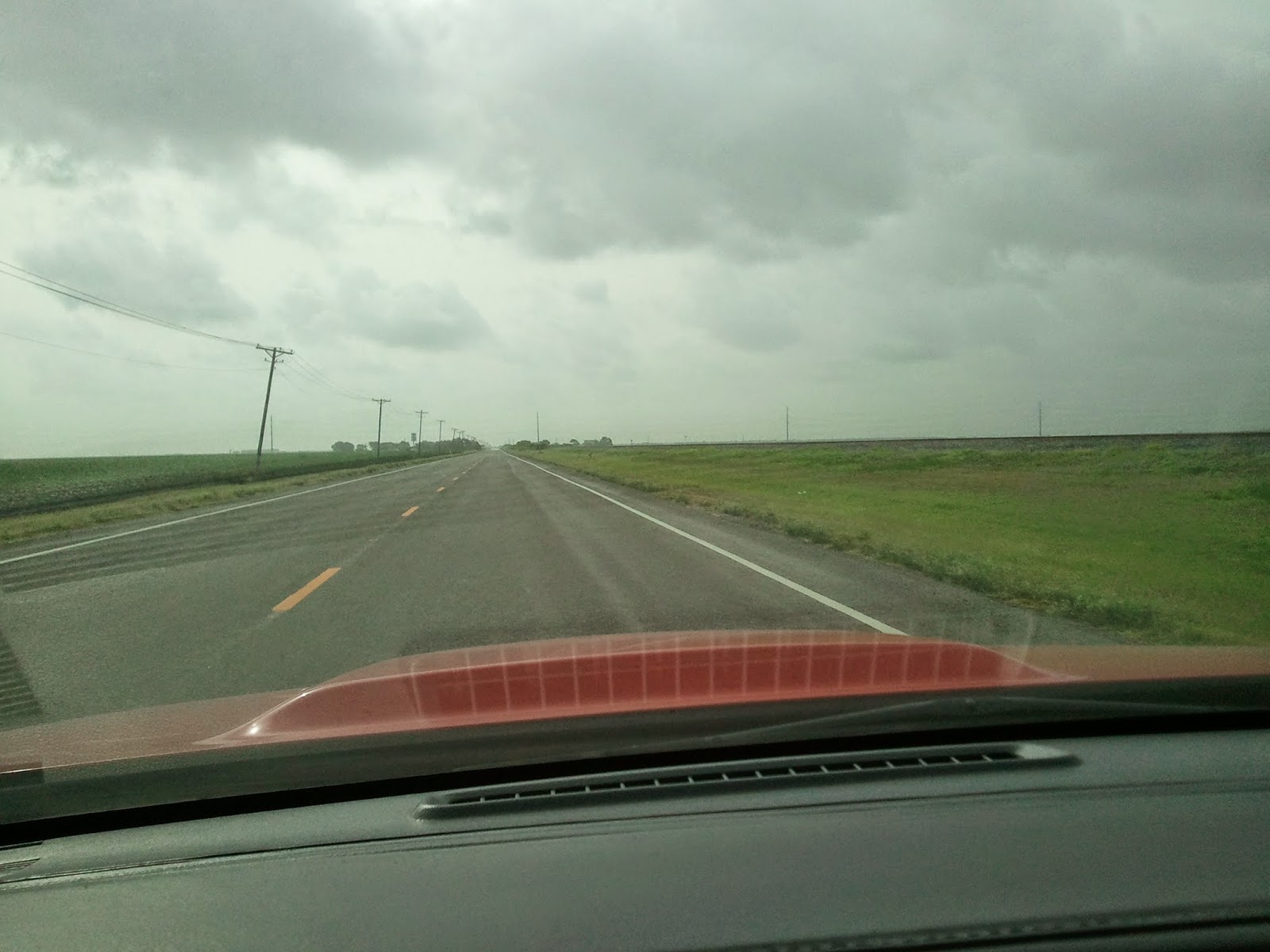 Two lane roads filled a lot of the trip ... open, flat, boring.  The Daytona ate up the real estate with ease and no fuss.  Personal opinion ... the power bulge needs to be bigger ... it's really just kind of a lump. 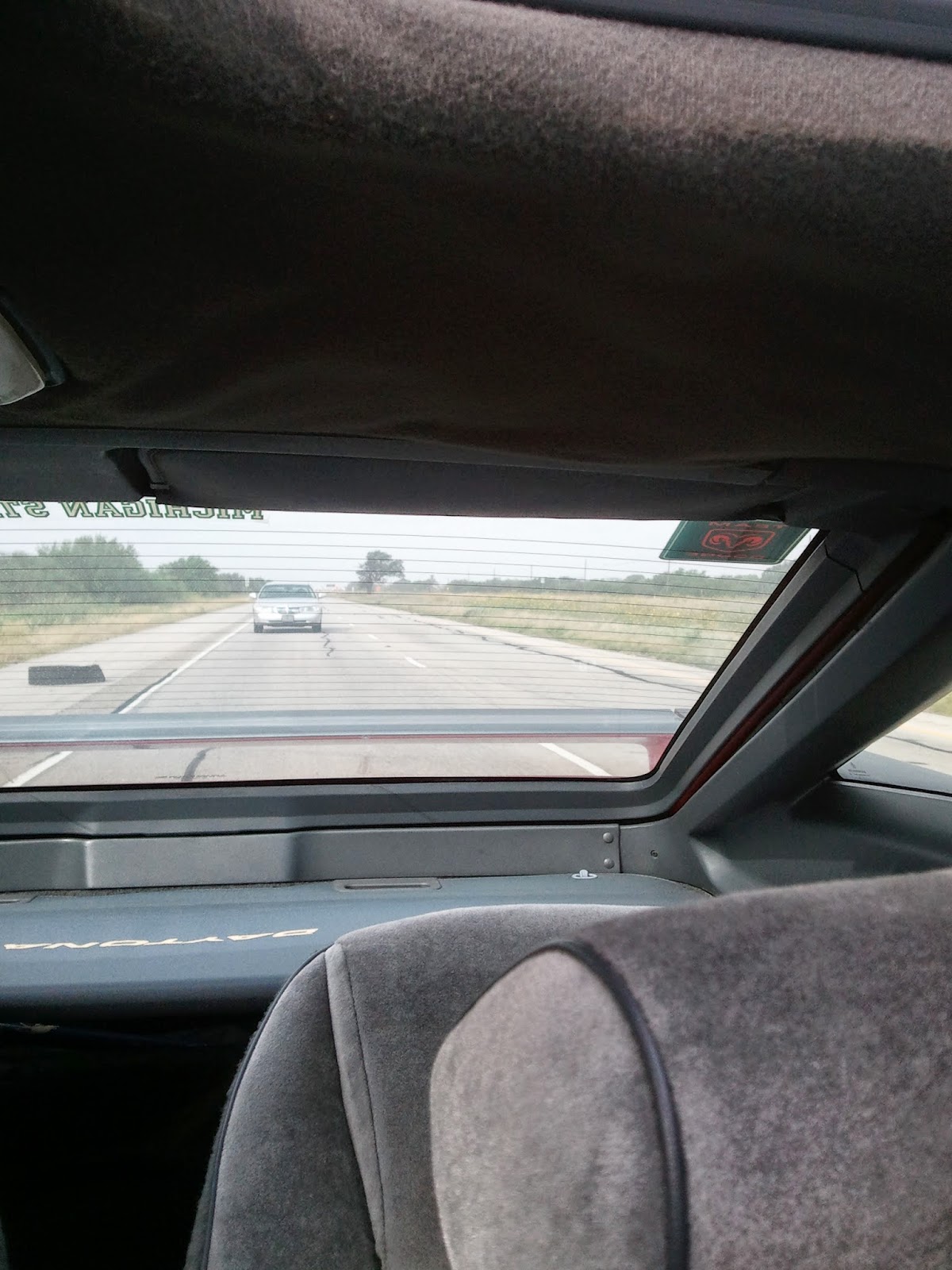 Cindy in the Lincoln chase car following me with all the tools and supplies in case the Daytona breaks down. 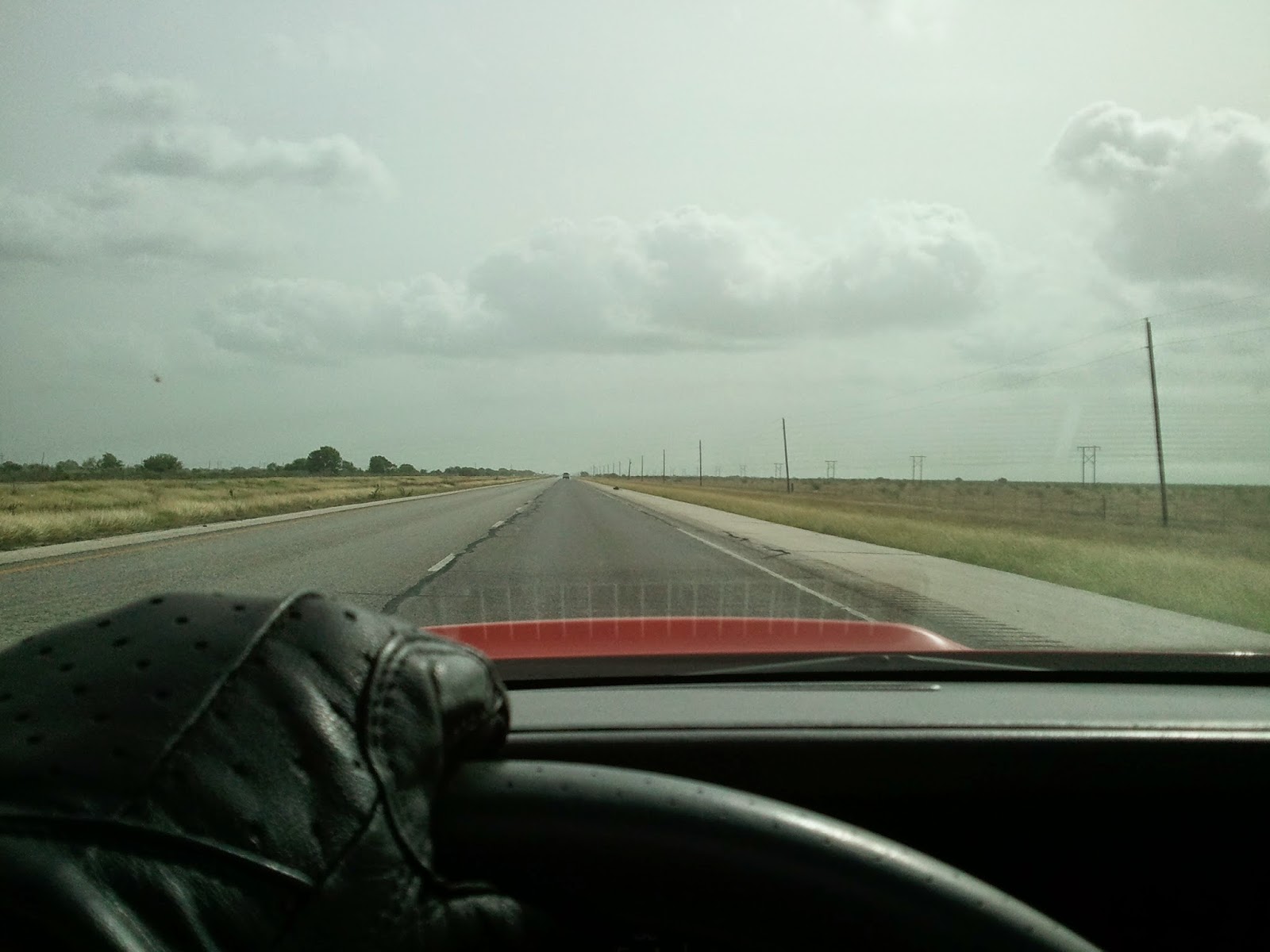 Driving gloves, tops off, windows down, eating up Texas real estate and listening to the iPod. 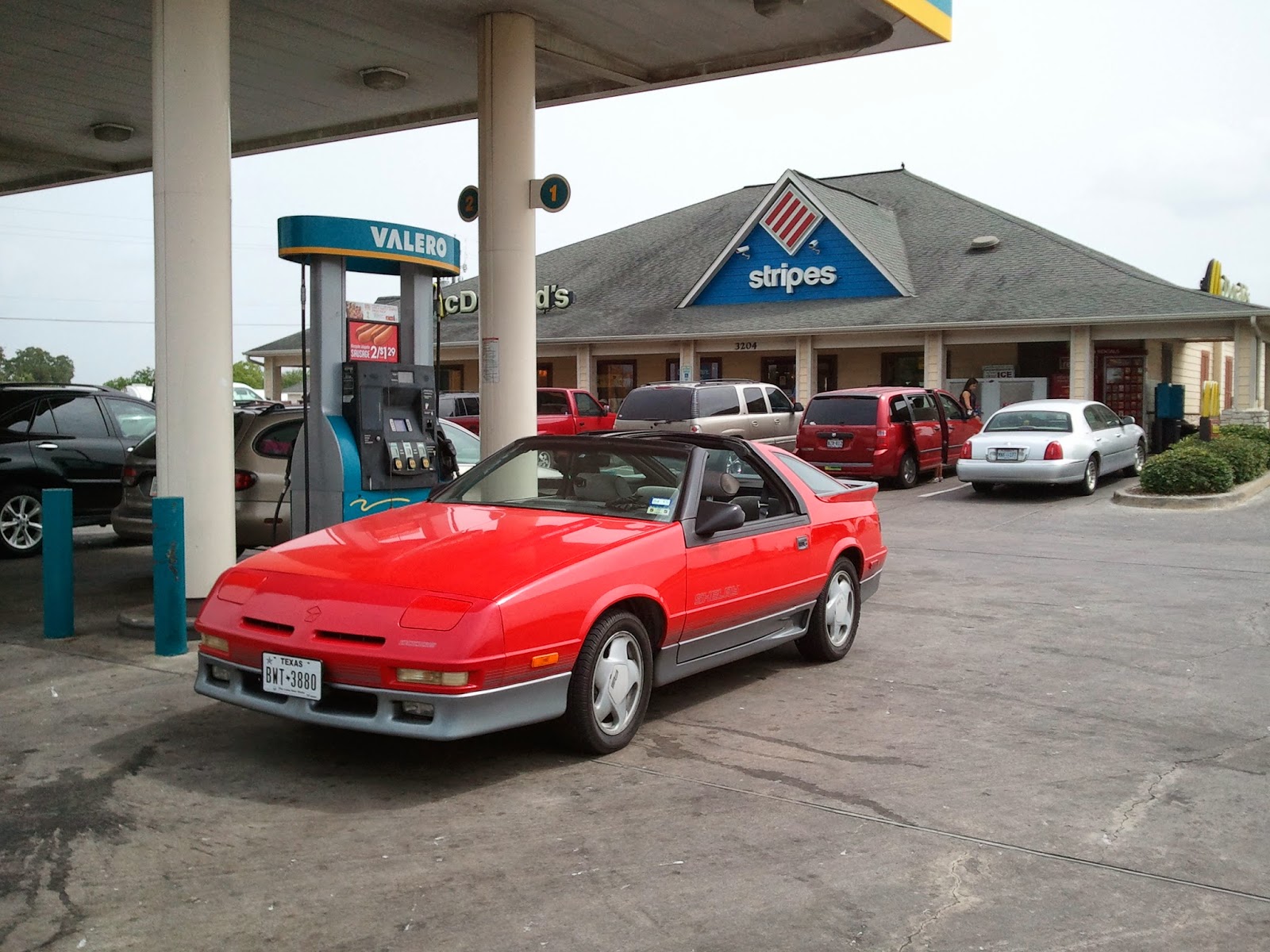 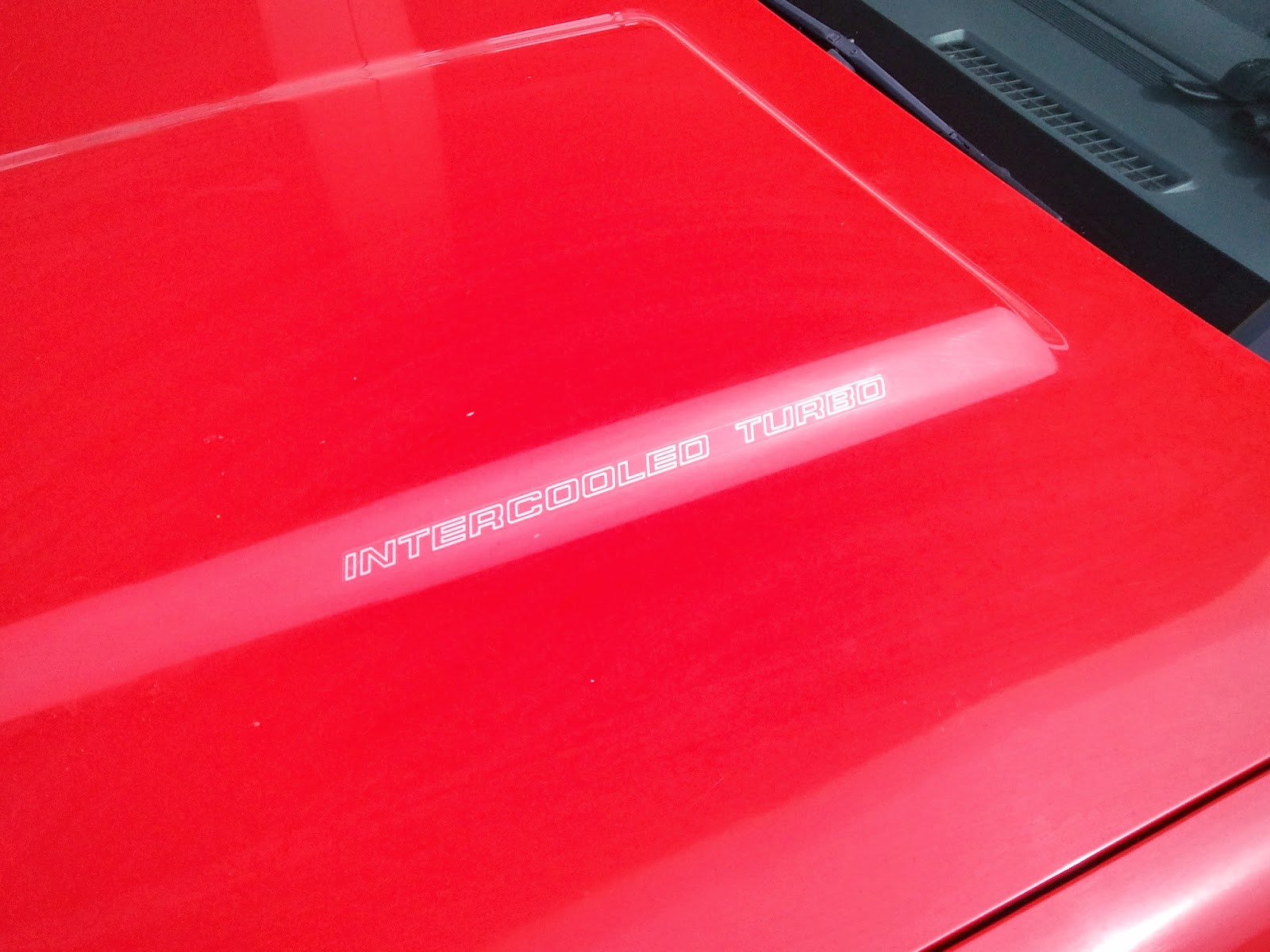 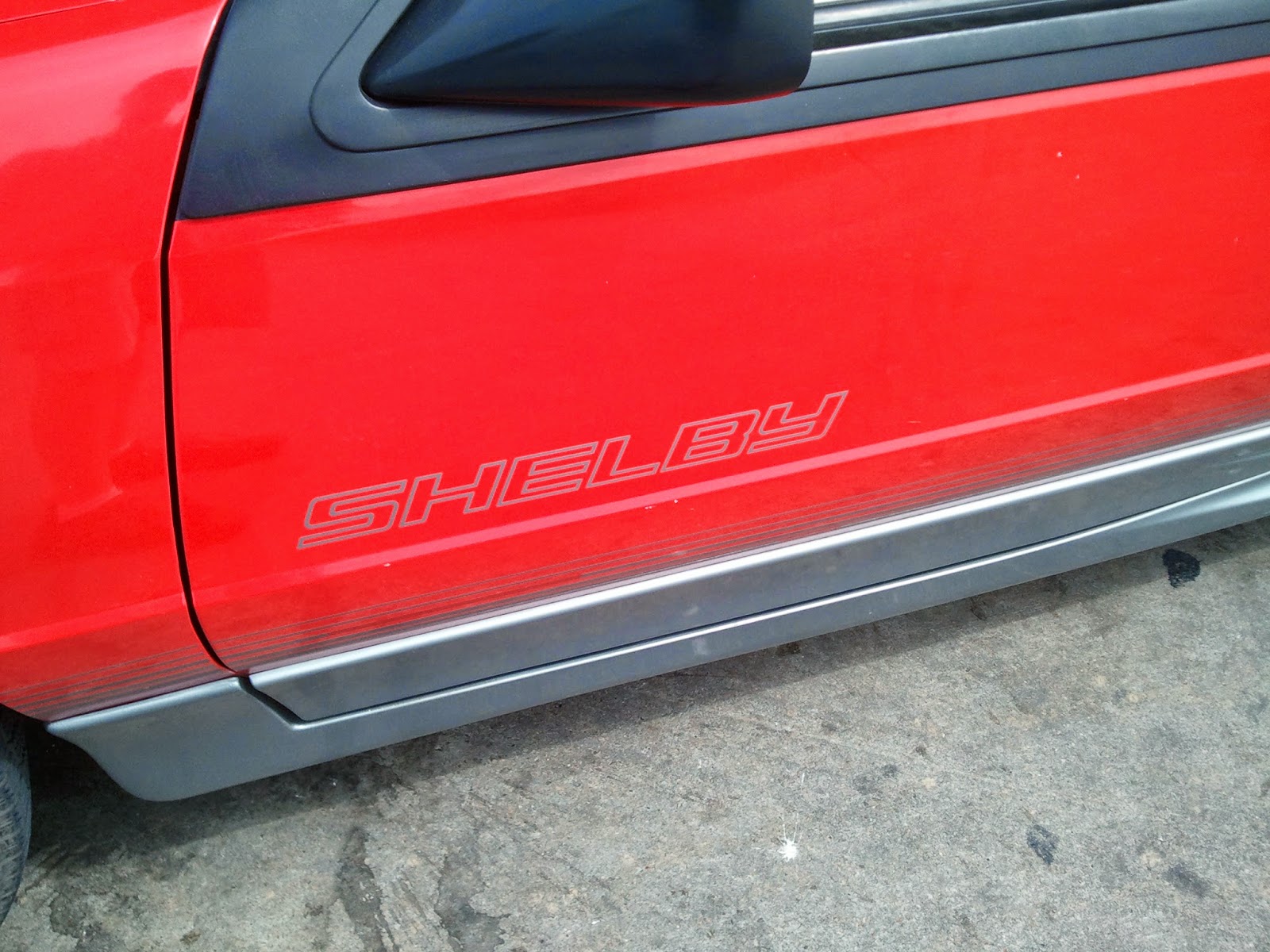 Side door graphic in case anyone wondered what the car was ... or who helped make it what it is.  Only a select few cars have carried this name and each one of them was nothing short of awesome. 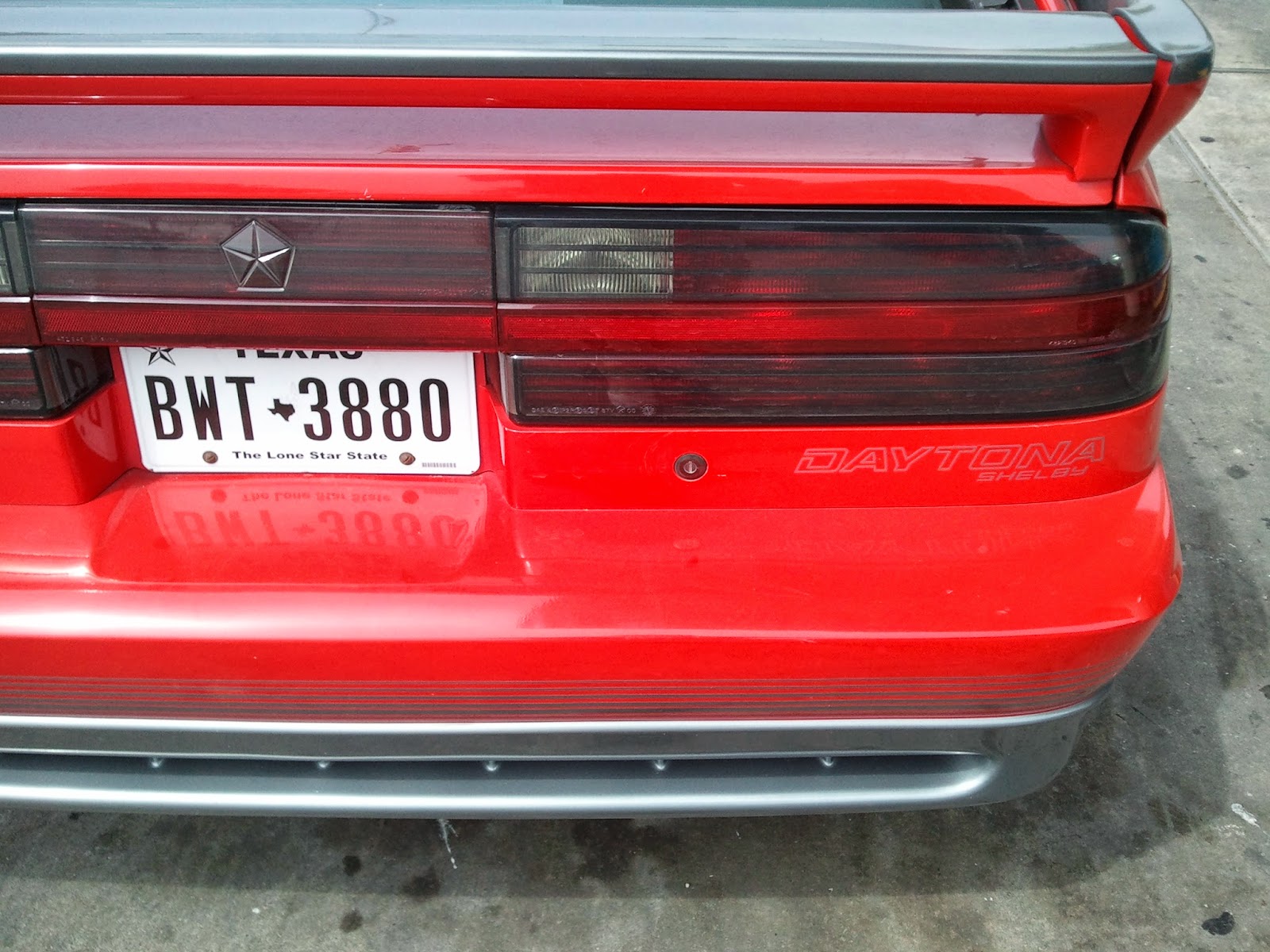 Daytona Shelby ... the slotted rear bumper below is what Dodge refers to as a "wake modifier".  At high speed it's kind of like an upside down spoiler that alters the flow of air behind the Daytona. 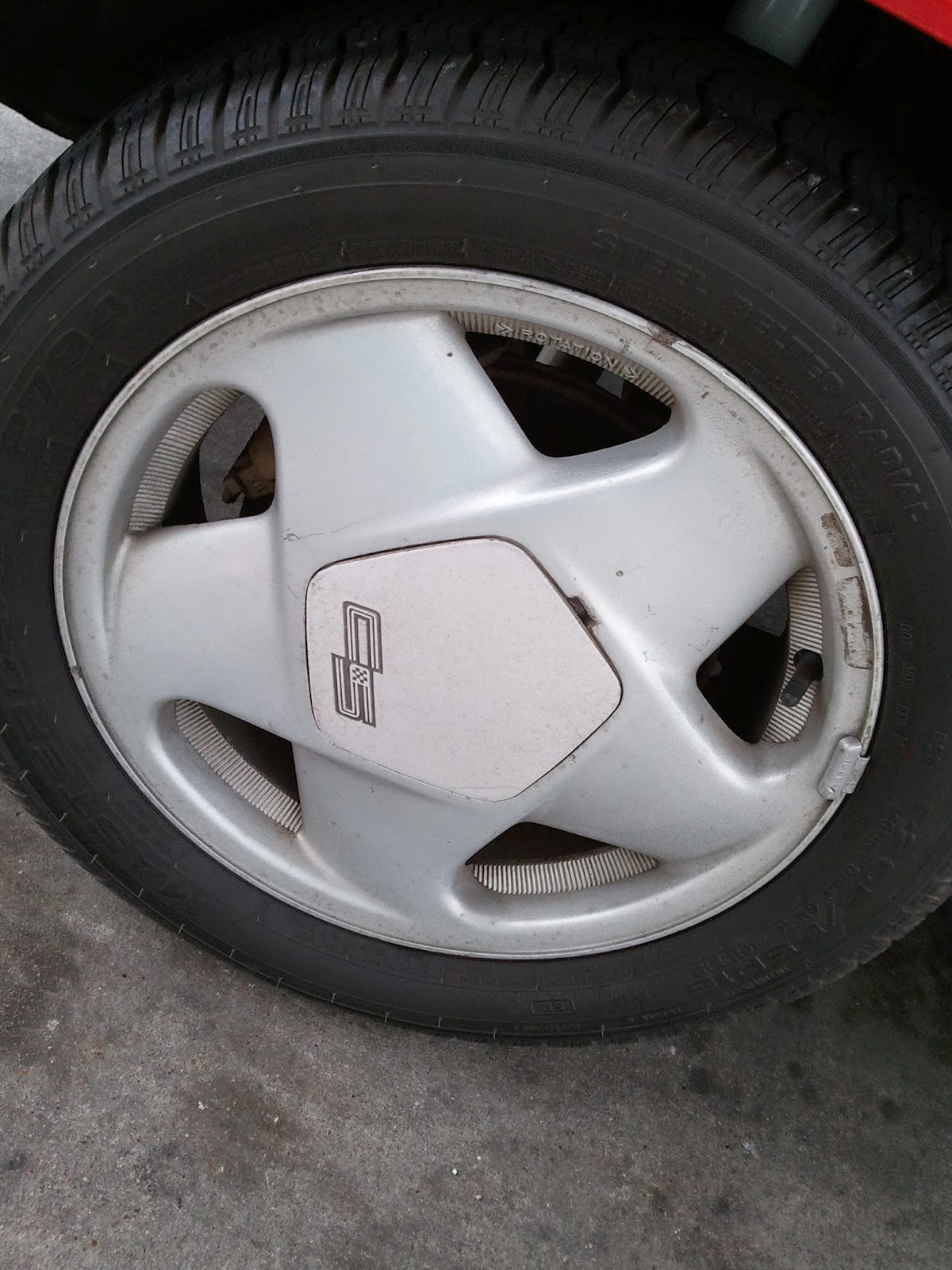 The "CS" logo is for "Carroll Shelby" - legendary racer and the man that the Daytona Shelby is named after. 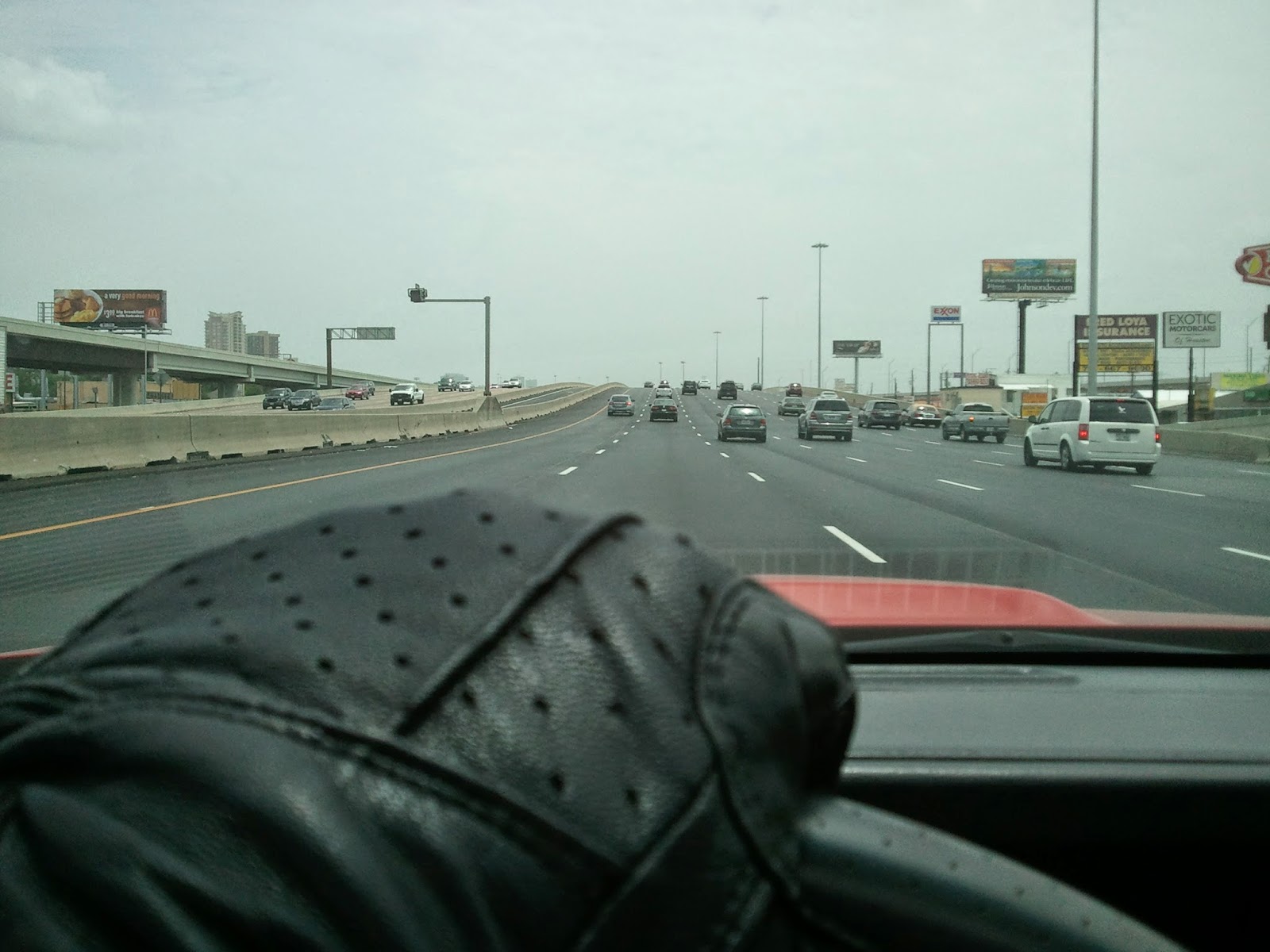 Getting into heavy traffic in Houston during noon rush hour.  It got about ten times more congested than this really quick.

The drive from Corpus Christi to Houston was uneventful save for the heat.  At speed, with the T-tops off and the windows down it was bearable.  Slow down and you started to slow cook but I was having way too much fun to complain.  This Daytona was everything that John said it was.  Thank God it had a light colored cloth interior ... if it had come from the factory with a black leather interior ... shudder.

We decide to eat at Whataburger on the far side of Houston.

The Daytona has been doing fine the entire trip.

We hit Houston sometime around 12:15pm and traffic quickly becomes a madhouse.  If you've never driven a turbo Dodge with a stick and T-tops in Houston noon traffic, all the while listening to Ministry's "Jesus Built My Hotrod" then you need to add that experience to your bucket list.  One other personal observation ... Houston smells like a steakhouse ... most of it, or at least the parts I drove through at high speed.  It was like doing laps around a barbecue pit and it only made me hungrier.

I had to drive with a mixed style in Houston ... on one hand I had to keep up with the flow of traffic while dodging idiots who never should have been given a driver's license (or a birth certificate) and on the other hand I had to go slow enough that I didn't get separated from Cindy in the chase Lincoln.  Somehow we both managed to keep up with each other and sling ourselves around the Houston beltway, point ourselves east and leave Houston in the rear view.  After nearly 30 minutes of hard driving I was ready for something to eat.

And that's when I noticed that the clouds had gotten a lot darker.  Most of the really dark clouds were to the north of me and with the T-tops off and the windows down I hoped that I could skirt the storms and rain (you could see the rain coming down in sheets in the distance) and get farther east, out of the storms.  I really didn't want to drive through a storm with the windows up, no AC and no defroster capability in hot weather that suddenly had a lot of humidity dumped into the area.

Any hopes of skirting the brewing storm were dashed by looking at the long lines of oncoming traffic ... their lights were on, there was a wet look to their paint and I could see a few with their wipers still going.  That meant ...

I looked ahead and saw a solid wall of falling water coming at me.

I put my blinker on, pulled over to the shoulder, hopped out, opened the rear hatch and put on the T-tops.  Large rain drops were starting to fall all around me, sounding like marbles on a tin roof.  I get pelted with a few before I hop back in the Daytona and shut the door.  I stab the power window buttons, both sides, at the same time, and watch as the driver's side window goes up.

It is really starting to rain now, heavy, big drops.

I look over and ... the passenger side window is still down.

The rain is starting to really come down now.  The wall of falling water is about half a mile away now and closing fast and my passenger side power window is not working!  I hop out of the Daytona, run around the rear of the Dodge, throw open the passenger side door and see that the window is all the way down in the door.  I pull out my Gerber Suspension II multi-tool (never go ANYWHERE without it), use the needle nose pliers to grab the glass and try to pull the window up out of the door recess.

I take one hand on the pliers, pull on the window, as I reach in and stab the power window button.  The window starts to rise, with me pulling it and the window lift motor pushing.  The window starts to rise then rises some more.  Once it clears the lip of the door it goes up fine ... it was like it was caught on something in the door.  I am getting soaked now, the rain is hitting so hard and heavy that I can't even hear the roar of traffic over the down pour of rain.  I get the passenger side window all the way up, shut the door, run around the Daytona and hop back into the driver's seat, closing the door behind me.  Fortunately I have kept a towel in the Daytona for sweat or if I got wet or whatever.  I use the towel to dry off and that makes life a lot better.  Just as I finish drying off my cell phone rings.

She asks what I was doing.

I explain to her about the rain, the T-tops, the lazy window ...

Cindy laughs her ass off.

I tell her that I love her, hang up, turn on the Daytona's lights, turn on the window wipers, try to get some cool air from the vents and carefully reenter traffic.  Cindy and I fight the rain from Houston almost to the LA state line.  When we do finally outrun the rain and pull over to get something to eat it is at the exact same Whataburger that we tried to eat at yesterday ... the exact same one.

We park, have a long lunch, top off the Lincoln with gas and then hit the road again.

The trip back was as uneventful as I had anticipated but I think that if luck had anything to do with it then the sheer amount of "Murphy Repellent" that I had packed in the trunk of the Lincoln did its job in warding off the master of disaster.  We got back to Columbia later than I had wanted to (way after dark) but the Daytona made it back with no problems other than not having air and (once) trying to develop a stubborn passenger side power window.