Seeing what I bought ...

I took the day off from work or rather, since I work four day weeks, I simply took my "off" day early and decided to work the rest of the week straight.  My oldest daughter was also going off to camp this morning and since I hadn't seen her since Friday (and I wouldn't see her again until this coming Friday) I wanted to at least see her off to camp. 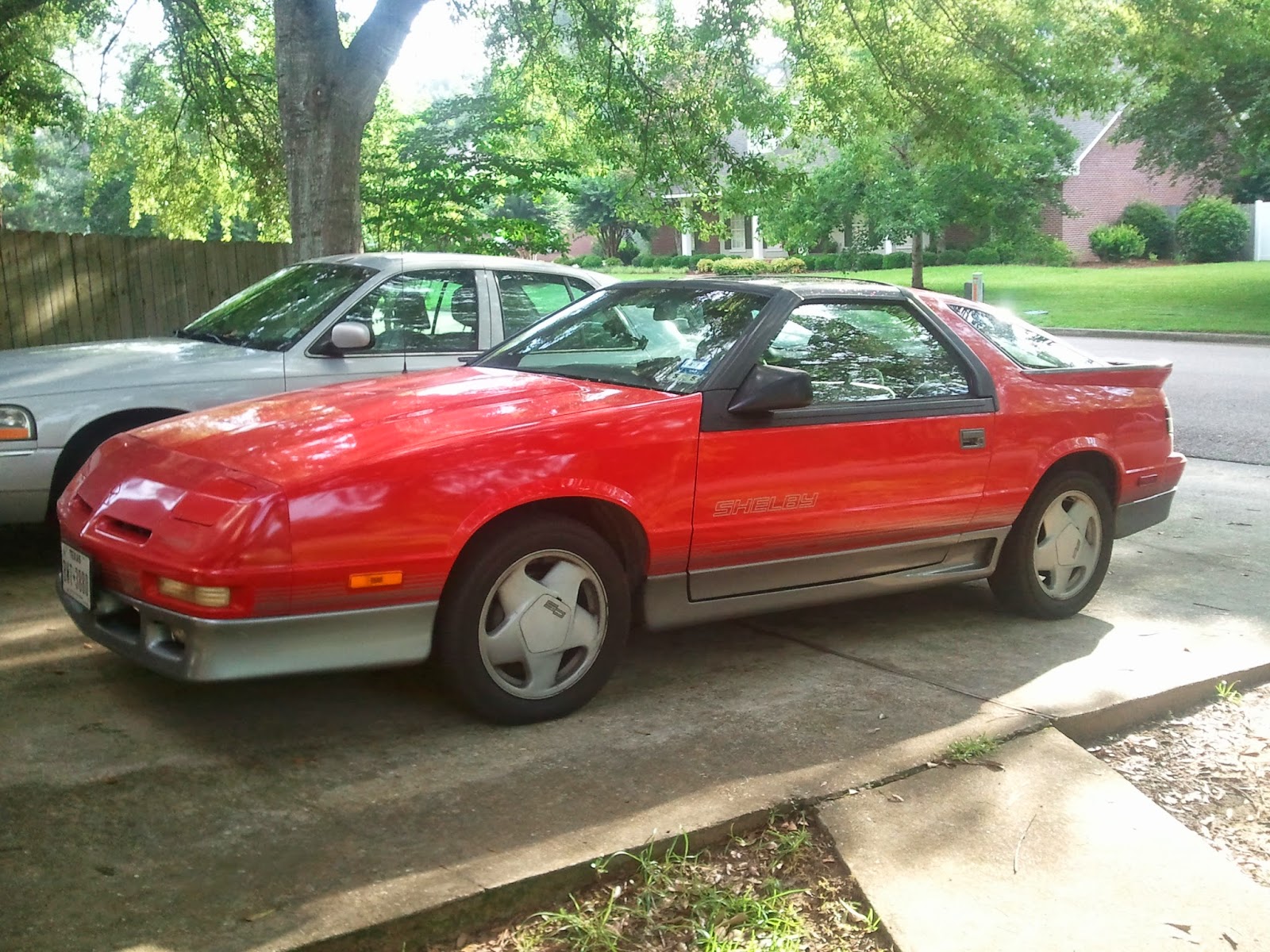 The '89 Daytona Shelby in the driveway of its new home. 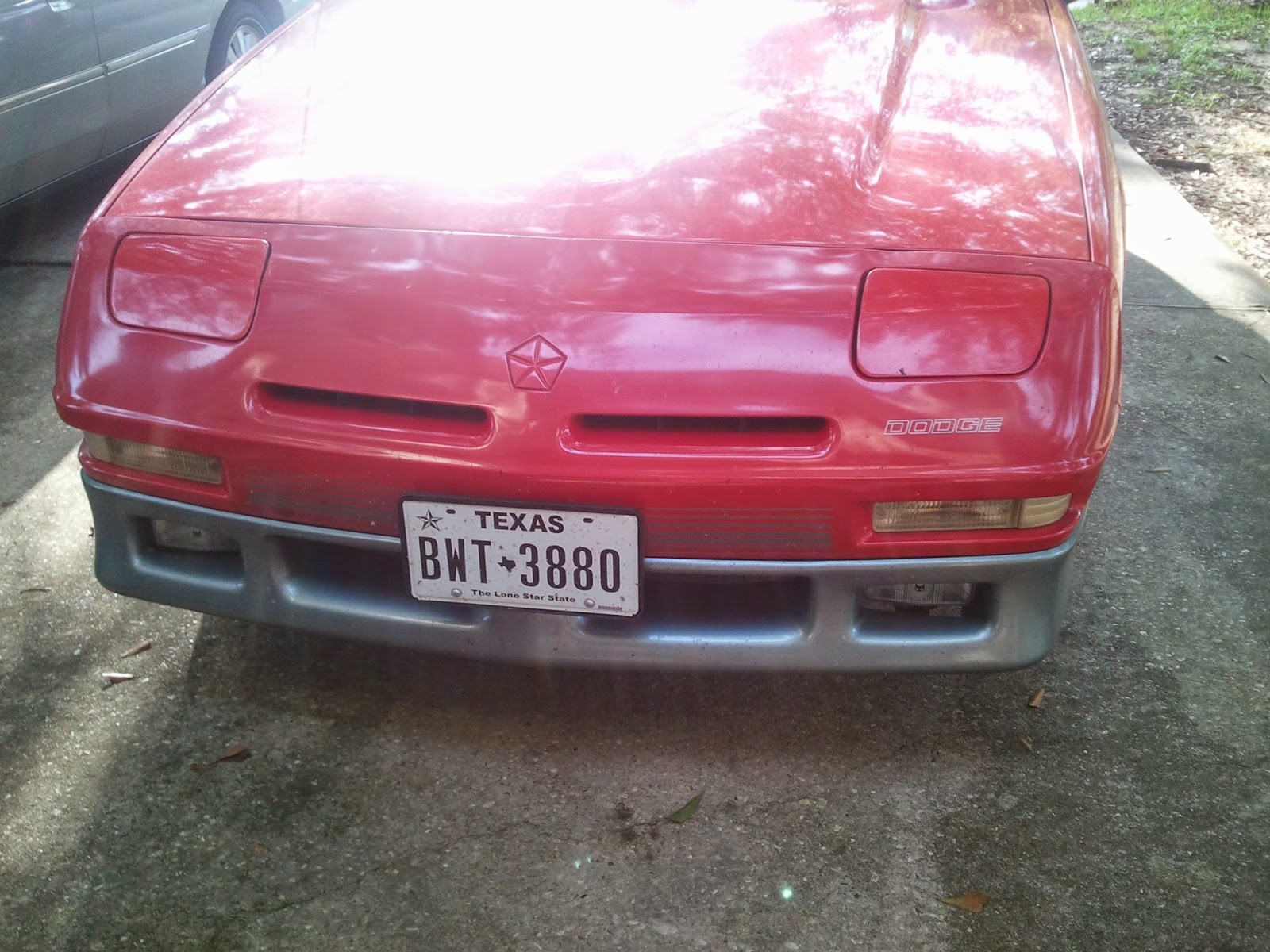 I don't know what it is about the Flash Red colored 1989 Daytona Shelbys but every one of them seems to have a nose piece that's a different shade of red than the rest of the car.  Either the nose held the correct shade and the rest of the car faded or vice-versa. 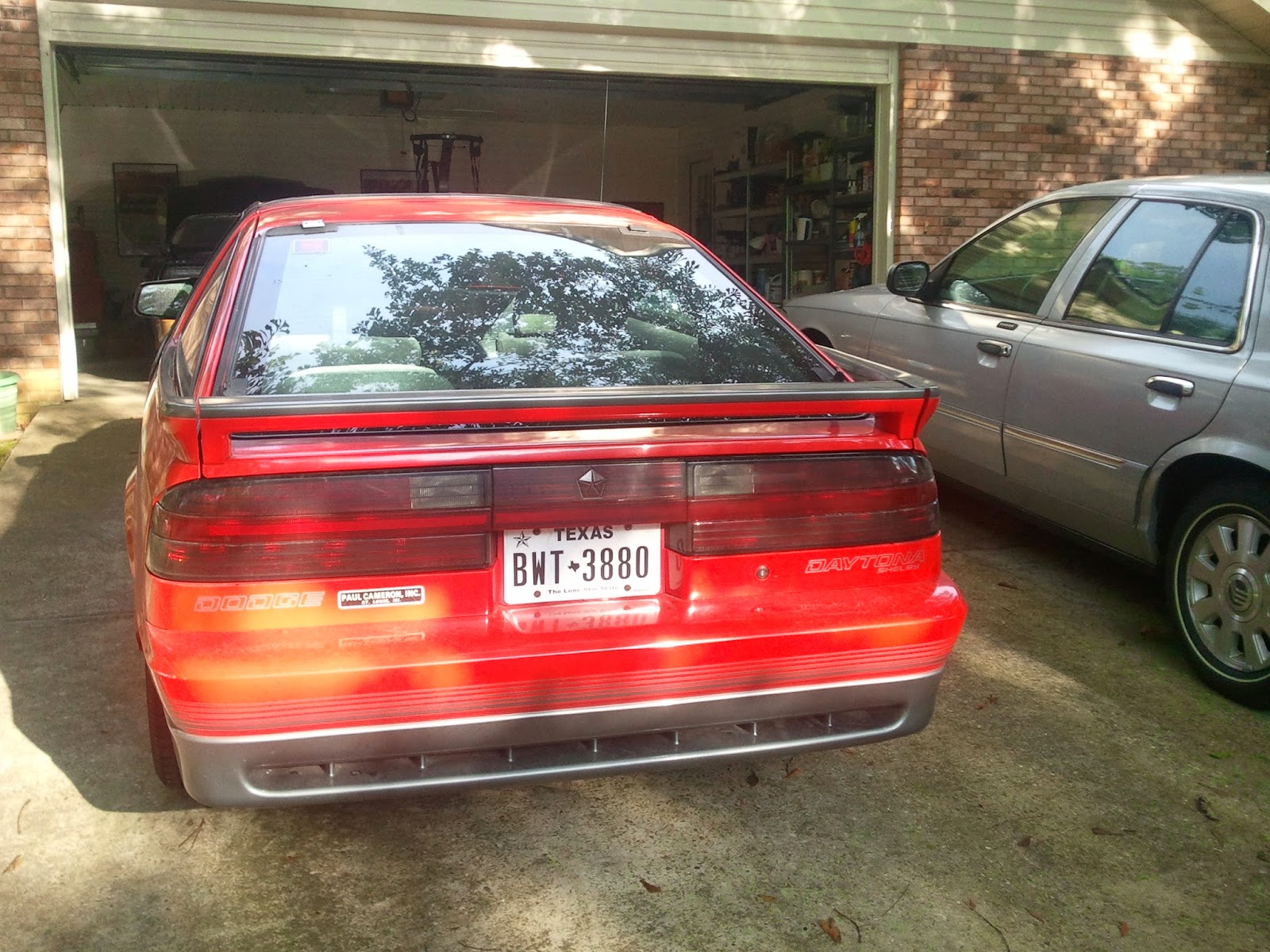 The '89 awaiting decontamination.  That's the '86 Pontiac Firebird Trans Am in front of it. 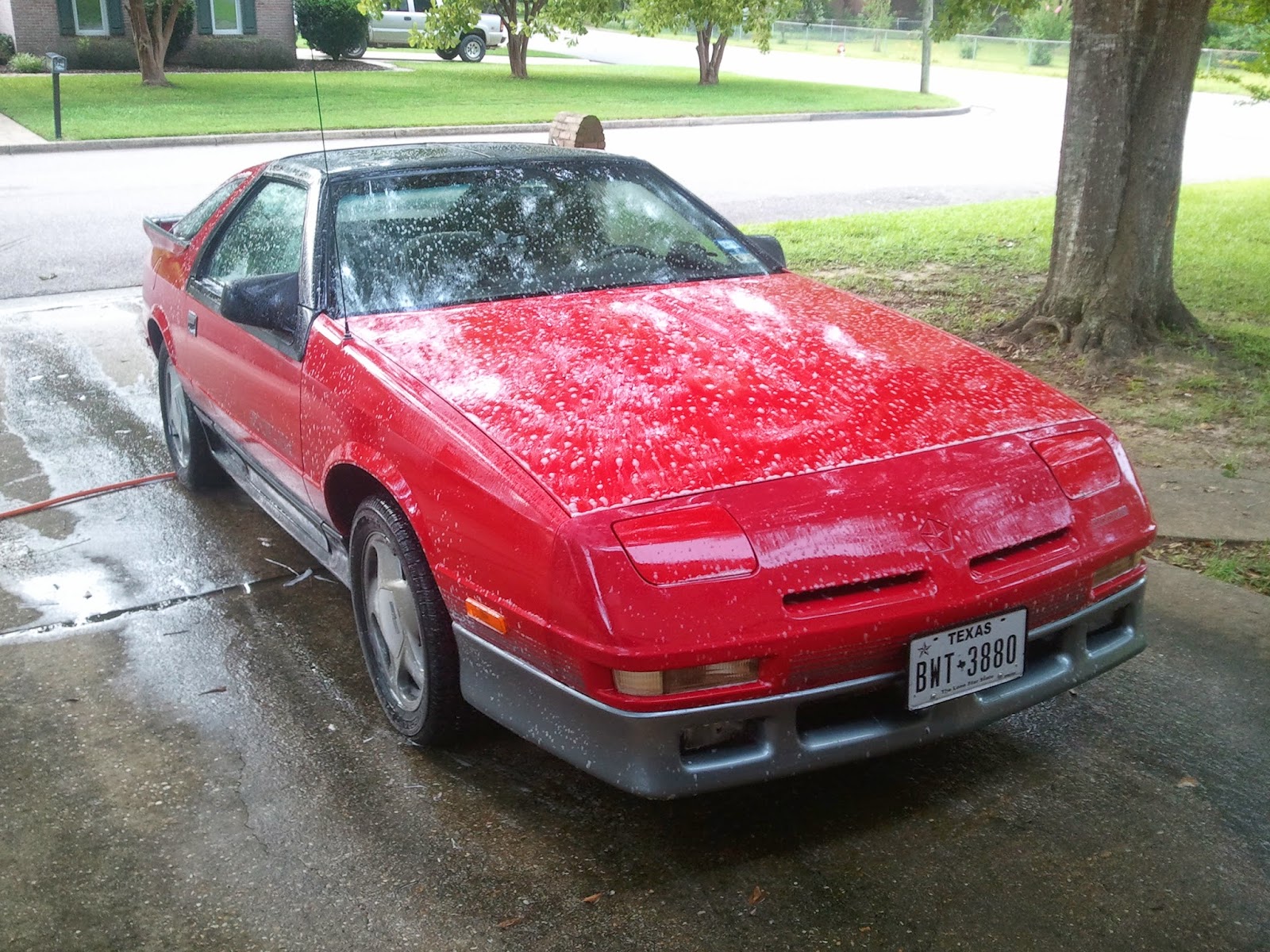 Suds up and hosed down.  You can see the different shades of red between the nose and fender / hood. 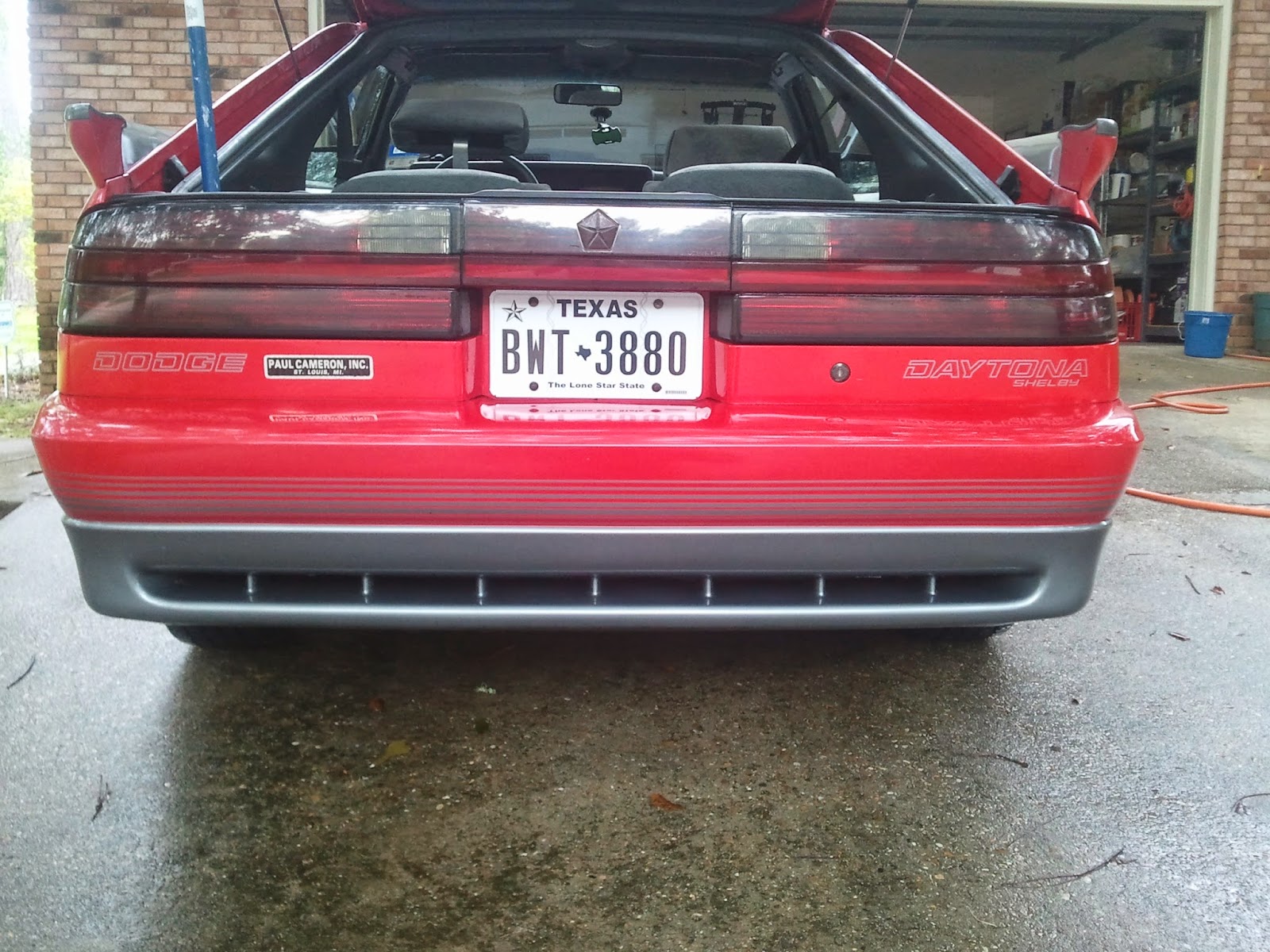 Dodge calls that rear grille thing a "wake modifier" and it supposedly helps aerodynamics at high speed.  Neat name ... I'll have to use it in one of my stories sometime.  While the "wake modifier" looks cool, I doubt I'll get any real world use out of it until much later as this piece of hardware is designed for sustained high speed road and track racing, not quarter mile performance. 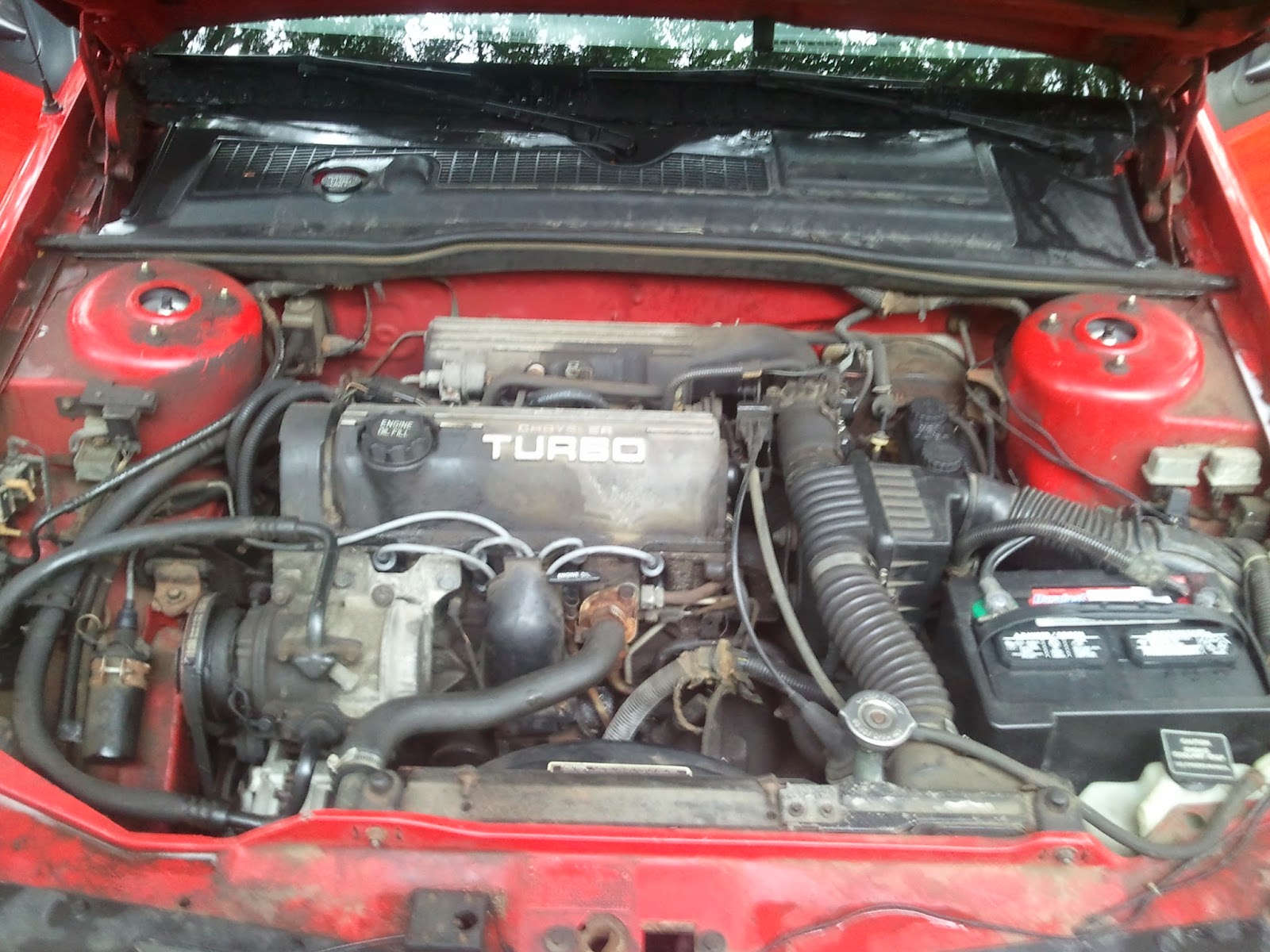 The all stock Turbo II engine.  2.2 liters of single overhead cam four cylinder fortified with port fuel injection, turbocharging and intercooling.  The guts of the engine are hardcore ...  This is about as dirty as the engine is ever going to get because after this I'll be keeping the engine a lot cleaner and detailed. 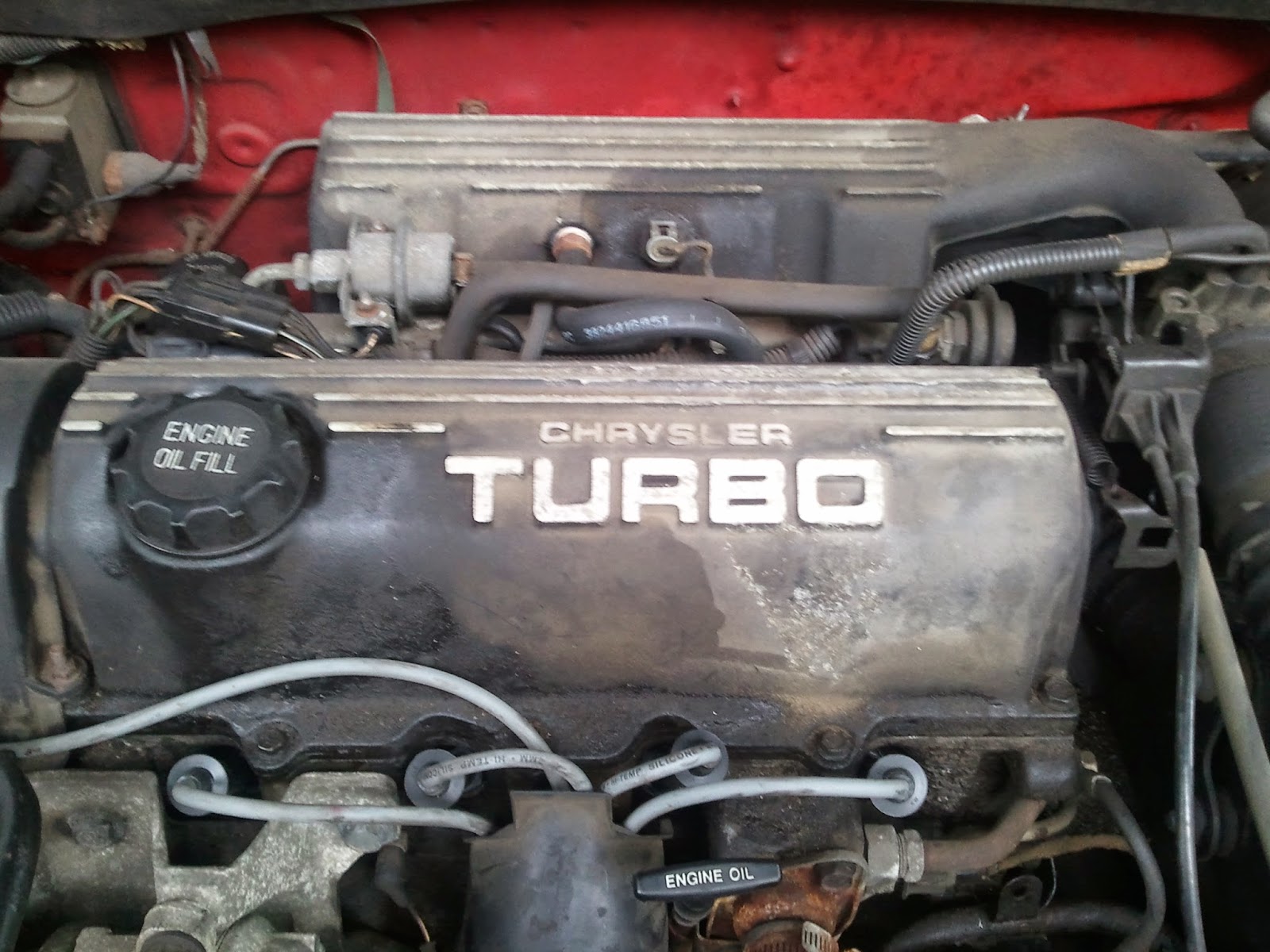 Notice the rusty thermostat housing.  I'll have to scrape that clean and repaint it.  Heavy oxidation on the aluminum parts that I'll also have to see about cleaning.  The valve cover needs to be sanded and refinished.  I think I'm going to paint the ribs and lettering bright red, contrasting with the flat black of the cover. 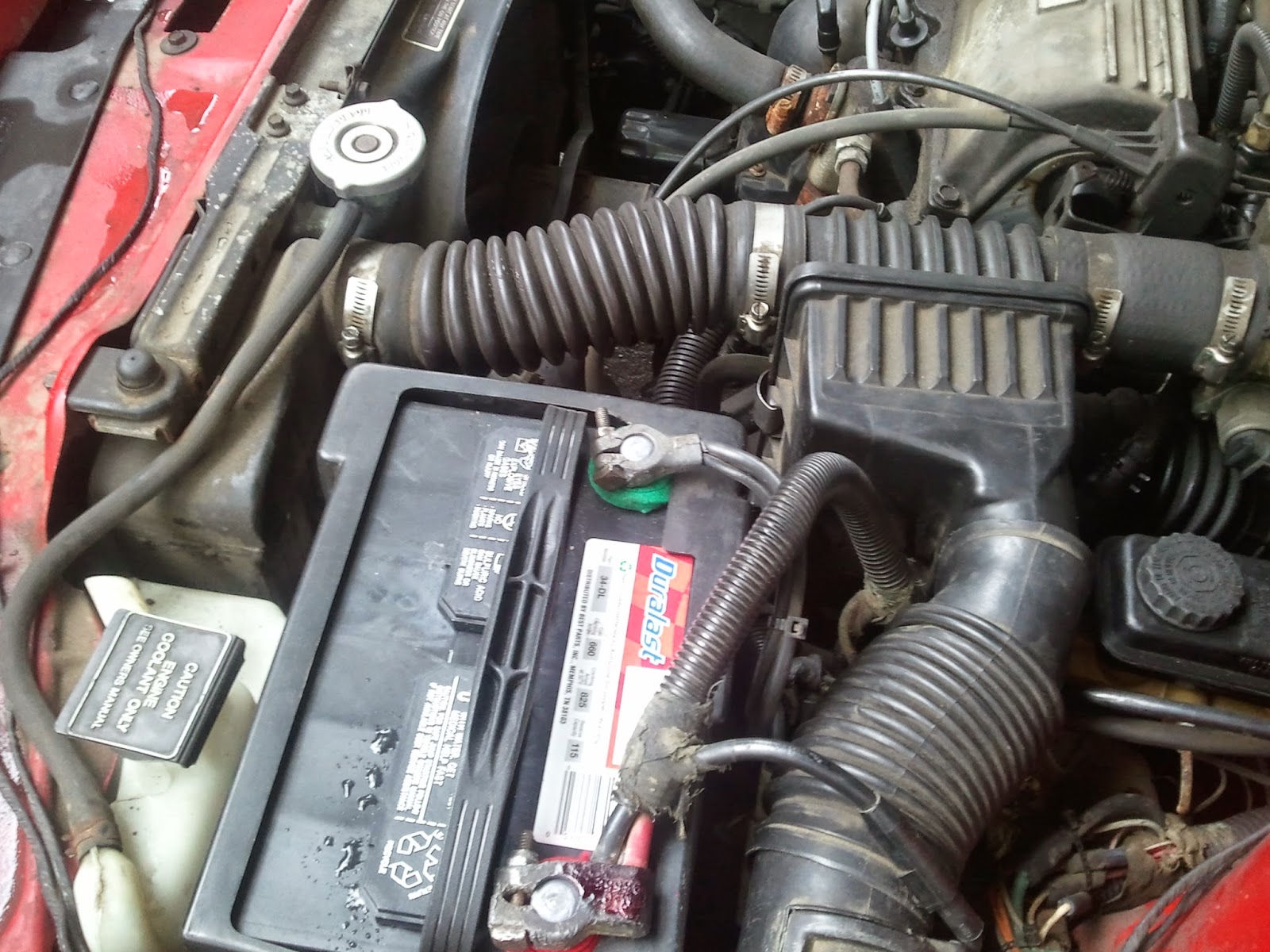 That's the factory intercooler there in the front to the left.  Several of the electrical connections are going to have to be unwrapped and rewrapped.  I may grab some ribbed conduit and close up some of the wires to clean things up. 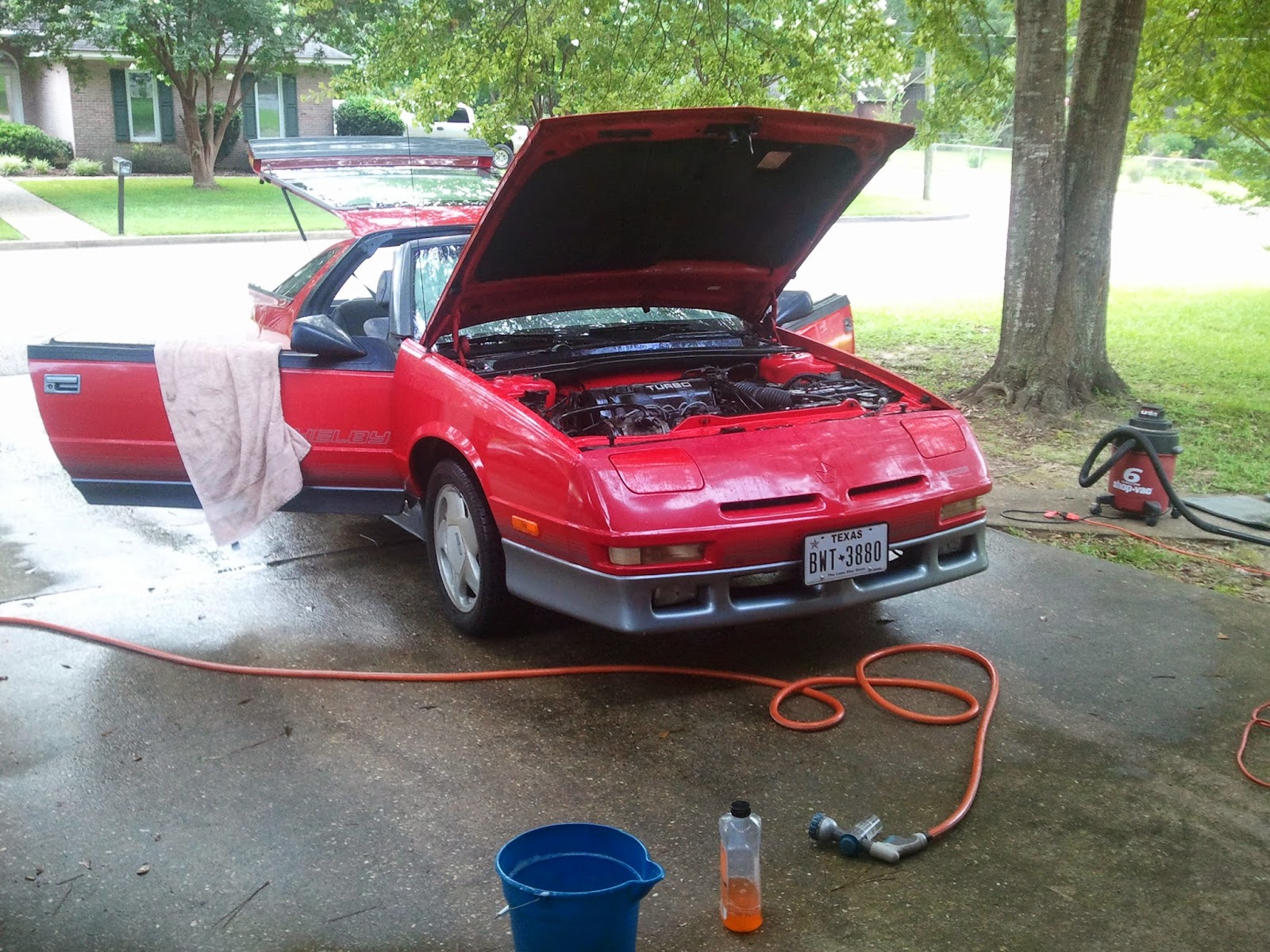 Hard work was never so much fun.  The wheels I'll probably pressure wash and chemical clean.  If worse comes to worse I'll just get them refinished.  The front license plate bracket is going to come off as well.  Mississippi only requires one tag, on the rear.  I'm not big on front tags or the brackets that hold them on.  I think they ruin the appearance of the car. 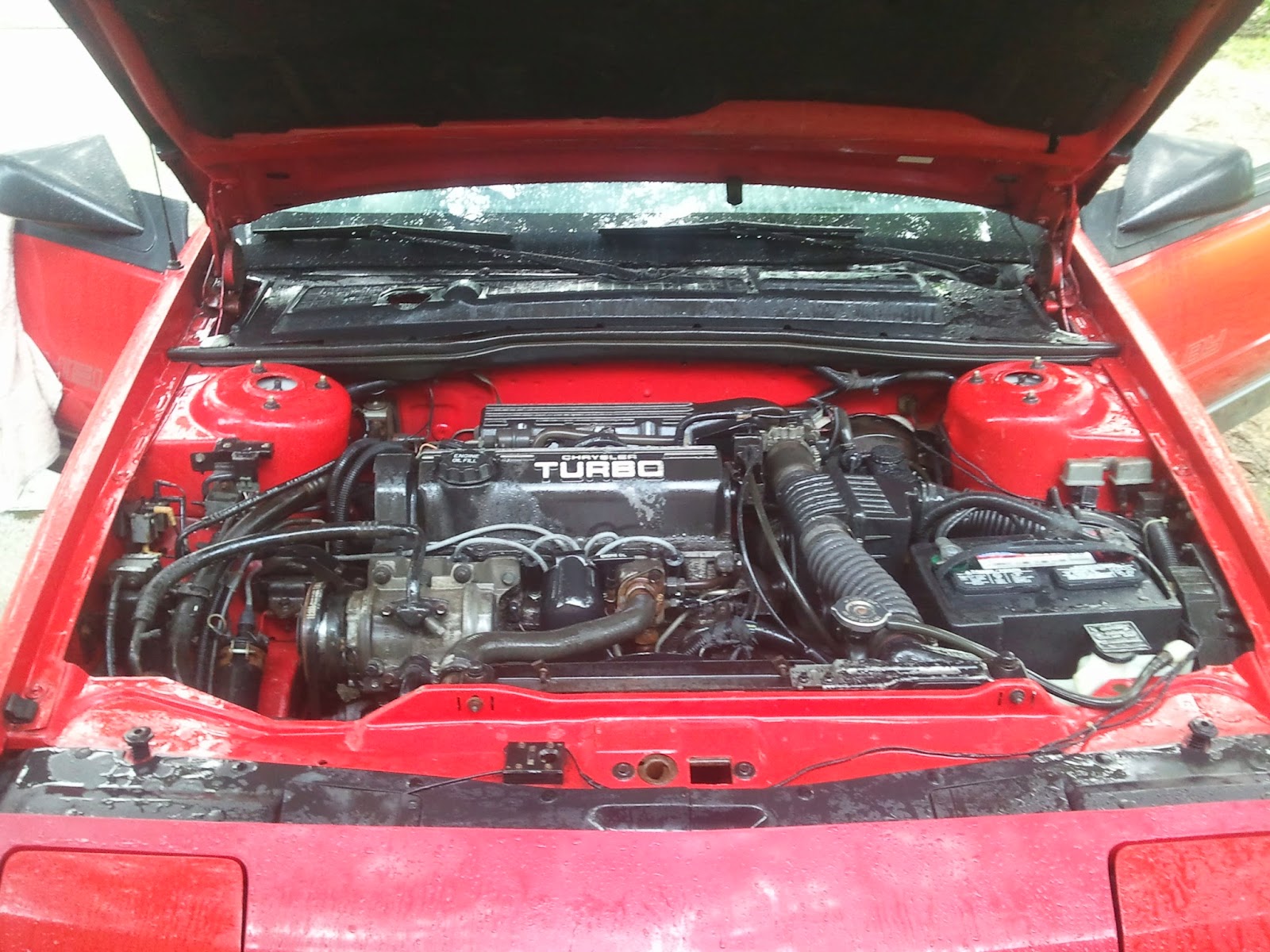 Here she is after about thirty minutes of elbow grease on the engine compartment.  I even pried up the black cover there at the base of the windshield and cleaned out the "trench" as well as the two small "Dagobah" dioramas that had taken up residence at either end of the windshield.  Twigs, leaves and other assorted debris from nature were all decaying in the two corners.  I vacuumed the mulch out then wiped everything down until it was clean.  The aluminum parts and the rusty parts are going to have to be refinished by hand and that means that they might have to be taken out of the engine bay to do so.  Fun.

9:45 came and my wife, two daughters and I climbed into the cleaned up Daytona and headed to our church to see my oldest daughter off.  Since the AC wasn't working, it was windows down and T-tops off ... again.  My daughters both said that the back seats of the Daytona were far more comfortable and seemingly more roomy than the back seats of the '86 Trans Am.

My youngest daughter told me that now that we had the Daytona that we were going to sell the '86 Trans Am.

I don't think so.

We see my daughter off to camp then my wife and youngest daughter and I decide to go get some lunch.  I let Cindy drive the Daytona since she hasn't driven it yet.  I hop in the passenger seat and she takes the driving seat and we head out to R&K Pitstop in Foxworth.

Normally I like to park on the back of the convenience store since I can sit, eat, and watch my car (I usually leave the T-tops off).  Since the Daytona doesn't have AC, we're going to have to leave the tops off and windows down while we eat.  We enter the parking lot, driving slow, drive around the back and every parking spot is taken so we have to circle around to the front of R&K and find a parking spot right next to the door.

We park the Daytona and get out.

An older gentleman steps out and asks me what kind of car the Daytona is.  When I tell him that it is a 1989 Dodge Daytona Shelby he is in total disbelief.  He says that he vaguely remembers the cars way back then but he hasn't seen one in a long time, especially one this clean.  He asks to look at it, tells me that he saw us drive around the store and he just had to step out and see the car.  He introduces himself as the new owner of the establishment and while Cindy and my daughter go on inside to order lunch I stay outside with the owner and we talk about the Daytona for a good ten minutes. 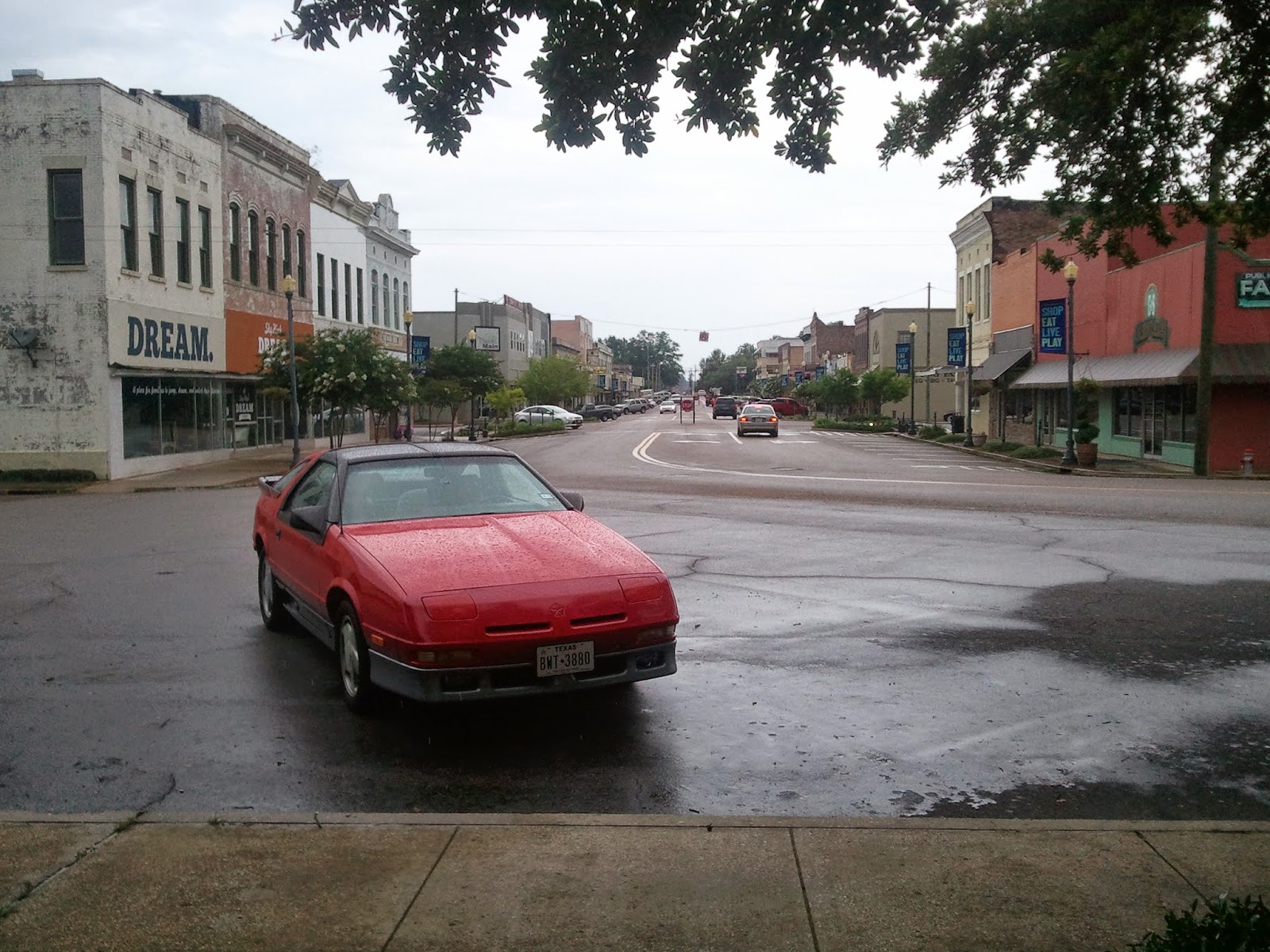 Later that day I head to the courthouse to try to get a tag.  I opt for an antique tag, the first I've ever bought for any of my toys.  Total cost for the antique tag?  $28 and I never have to pay for it ever again.  I get the basic information, a form to carry in the Daytona and the tag will arrive in a few days.  A light shower came up while I was in the tax assessor's office and when I came out the Daytona was covered in a sheet of rain droplets.  So much for cleaning her up earlier this morning.

I liked the composition of this picture so I snapped it with my phone ... the Daytona parked at the courthouse on Main Street ... downtown Columbia ... downtown old America.

I drive over to Advanced Auto Parts, Autozone and finally O'Reilly Auto Parts to see if they have a pair of rear hatch lift supports to replace the depleted ones on the car now.  No one has any but O'Reilly has the cheapest prices so I order two struts from them.  The struts should be in tomorrow. 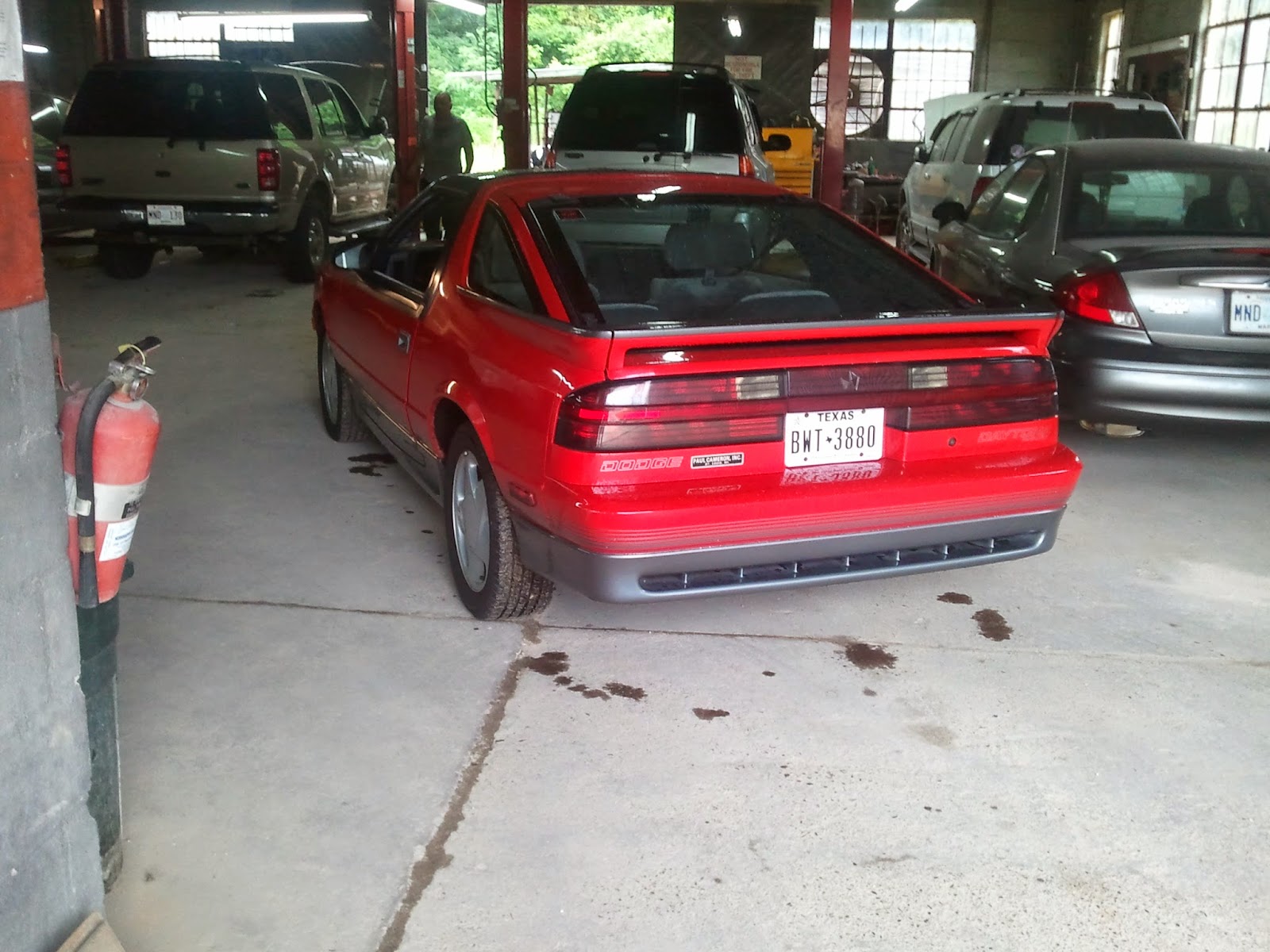 Later that afternoon I dropped the Daytona off at my mechanic to convert the old Freon based AC over to the new refrigerant.  This is the last that I see of the Daytona for a few days.