I drove the Daytona to work again yesterday, same routine.  Tops off, windows down, Ipod playing in my ears, rowing through the gears and loving life.  The Daytona really turns heads ... there aren't many of these cars left on the road let alone one in this good of a condition so naturally people look and comment.  I've had three people in traffic this week roll down their window at a stop light and comment on my Daytona or ask me about it.

That never happened when I was driving my Lincoln.

I called my mechanic.  No, the AC hose hadn't arrived yet, give him a call tomorrow after lunch to see if it arrived or not.  When I got the Daytona home last night I give her some TLC, washed her again, vacuumed her out and did some minor detailing.  Life seemed to be picking up.

I got up this morning, loaded the Daytona up and drove to work.

I got seven miles out of Columbia and away from home.  Everything was going fine, transmission in 5th gear, cruise set at 65mph, Ipod jamming out, tops off, windows down ... and then the Daytona stopped pulling.  I was climbing the west side of "the BIG Hill" on highway 98 when the Daytona just ... died.  No drama, no bang, no noise, no cloud of ominous smoke from under the hood or out the exhaust.

I have a full tank of gas.

All gauges look normal except the tachometer is zero RPM, the speedometer is falling slowly and the Daytona is dead, coasting at 65mph on the highway.

I push the clutch in and try a hot start.

I yank out my earphones and try a second hot start, working the clutch and shifter, putting the transmission in neutral.

I keep the key turned.

The mechanical parts are turning over fine it's just not lighting off.

Knowing that I'm not going to fix this problem coasting down the highway I put my blinker on and pull off at the top of the BIG Hill.  I try a restart.  Nothing.  Engine spins, turns over but won't light off.

For the miracle of internal combustion to happen you need three things:

I know I'm getting air, that's not a problem.  Fuel and fire could be the problem and I did have that flameout two days ago when I ran the Daytona dry.  My first thought is that running the Daytona dry had either clogged the pickup screen for the fuel pump or damaged the fuel pump and that it had finally given up the ghost.

Another thought ... this is a 25 year old car.  It's going to have parts start to give up the ghost.

Another thought ... Thank you God that this didn't happen on the way back from Corpus Christi, Texas.  I raise my hands, pump fists out the open T-top roof and thank God in a loud voice that I broke down here, seven miles outside of Columbia and that He didn't let me break down seven miles outside of Houston, Texas.

Still, it's strange for the Daytona to have made it almost a thousand miles now with no problem and suddenly just die.

I put my emergency flashers on and sit there thinking about my problem.

I try a restart, thinking something might have gotten overheated or overloaded.  If I can turn the Daytona around and get it back to my garage I'll just take my '86 TA or my '04 Honda to work.  The engine lights off and I'm overjoyed.

The engine immediately dies again and refuses to relight.

Okay, I'm not the kind of guy that will get out, pop his hood on the side of the road and start to poke at things I know nothing about all in the fervent hope that God Himself will somehow send a miracle through my fingertips that will heal my stricken Daytona and get me back going again like it never even happened.  No, I'm a thinking man, a tool using creature and right now my greatest tool is my brain powered by my many years of knowledge of working on cars.

And that's when I realize that not only am I going to be late for work but that whatever the problem is with the Daytona that I am not going to be fixing it by myself, MacGuyver-style, on the side of the road.  I get out my cell phone, call my wife, explain the situation, then call Vernon Beal's Body Shop because they have a great towing service with a flatbed.  I talk to Joe, who I've known since '97 and tell him where I am and ask him to come get me with the flatbed.  He says he'll be there in about 15 minutes.

I try to give Joe business every few years.  The last time Joe and I did business was about four years ago when I struck a sharp piece of wood on Highway 13 north and tore a 6 inch slash in my Lincoln's left rear tire, instantly deflating it and putting me on the shoulder of a very narrow, very busy two lane Mississippi back roads highway.  Since there was no way that I could change the tire without exposing myself to the oncoming lane of traffic I just called Joe, had him haul the Lincoln in to Delk's Tire Shop where I bought another tire and had them mount it.  Buying a new tire or getting run over?  You do the math.

Anyway, the Daytona is dead on the side of the road.  I'm waiting on the wrecker and all I can do is get Joe to take the Daytona back to my mechanic and tell him to fix this problem as well.

Somewhere off in the distance I can hear Henry Rollins laughing his damn ass off. 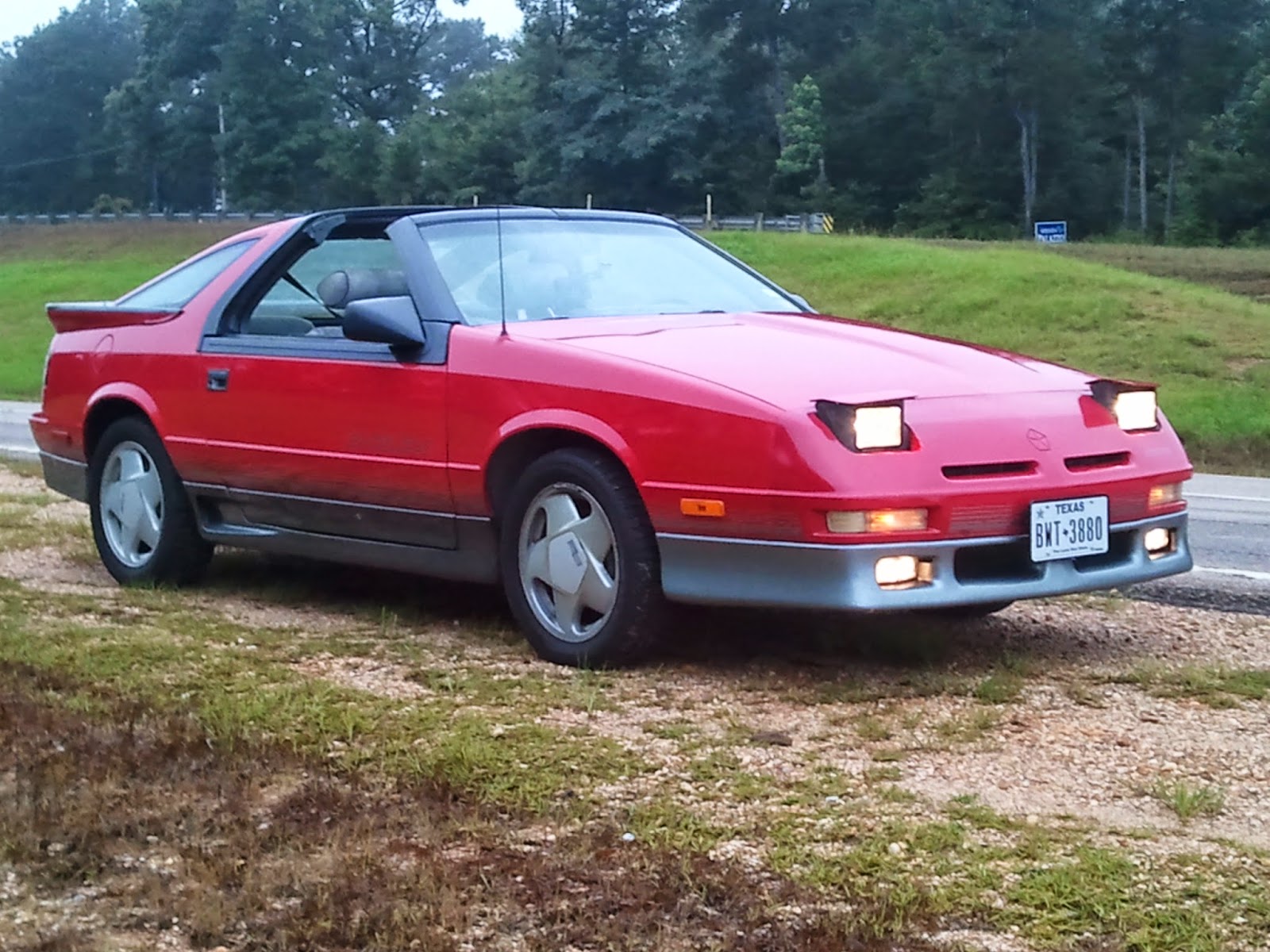 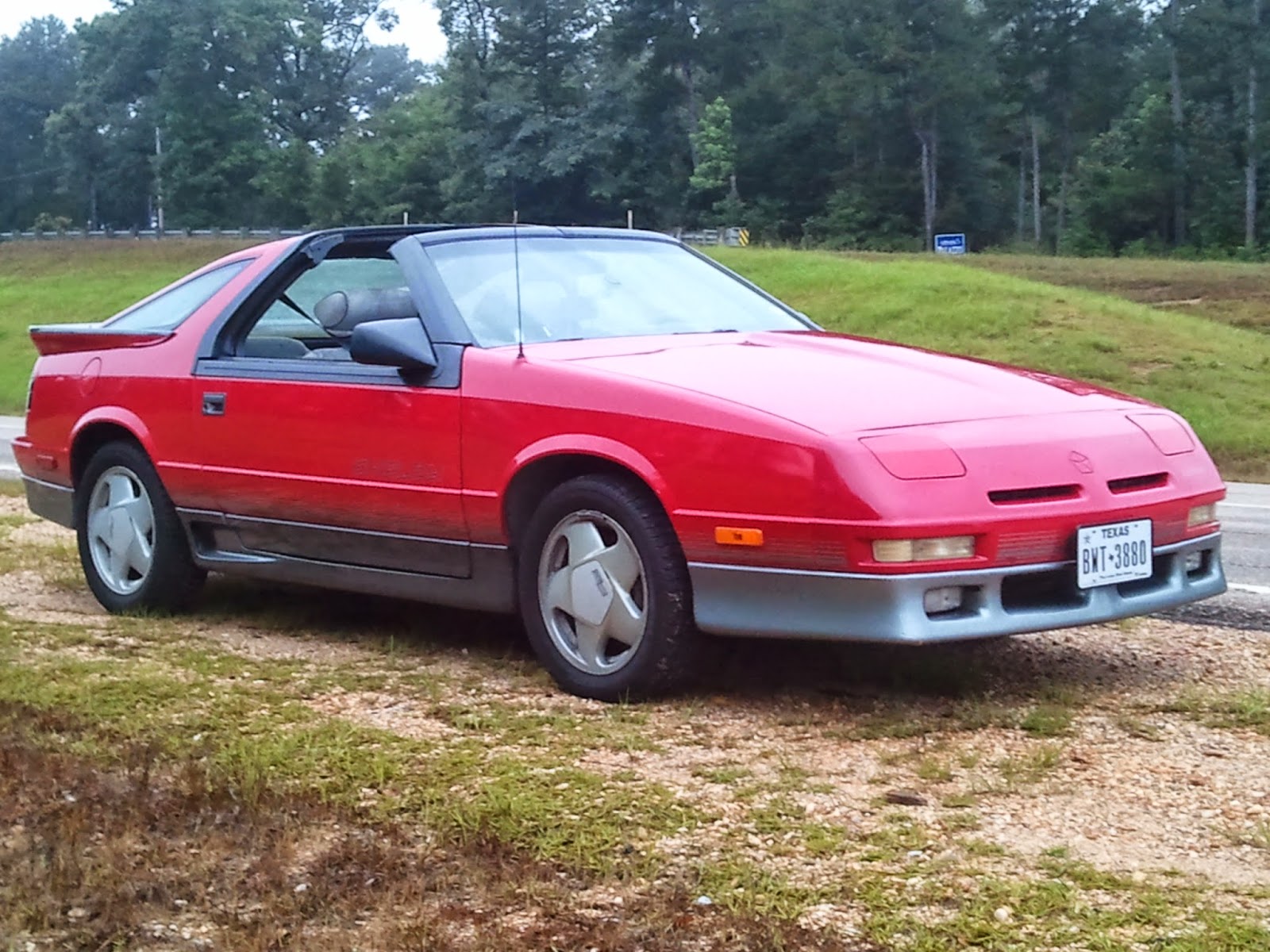 Still sitting pretty.  Nope.  Not going anywhere.  No fuel.  No fire.  No go-go. 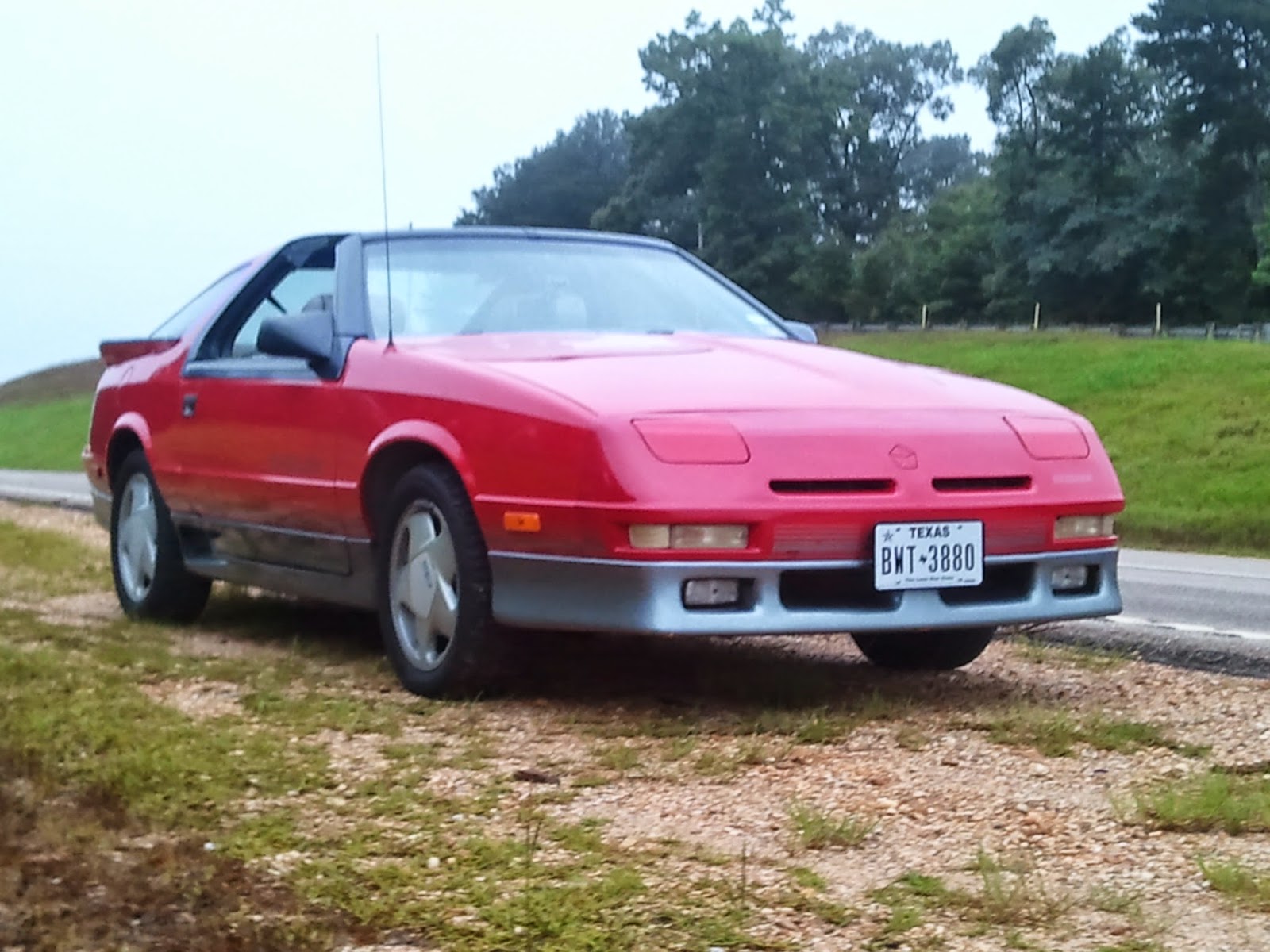 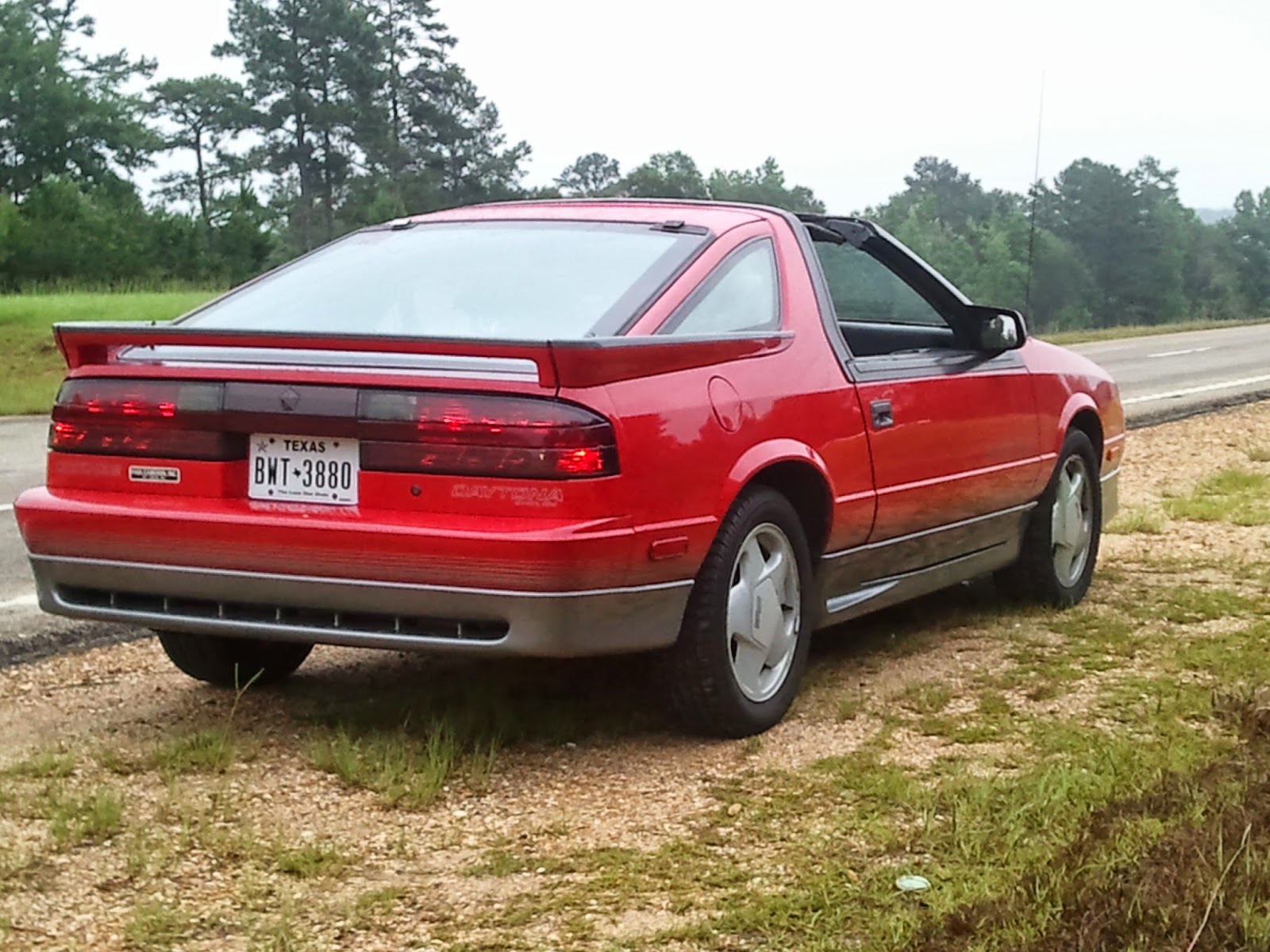 I like the rear aspect of the '89 Dodge Daytona.  It looks fast standing still which, right now, is all that it is doing.  Looking fast and ... standing still. 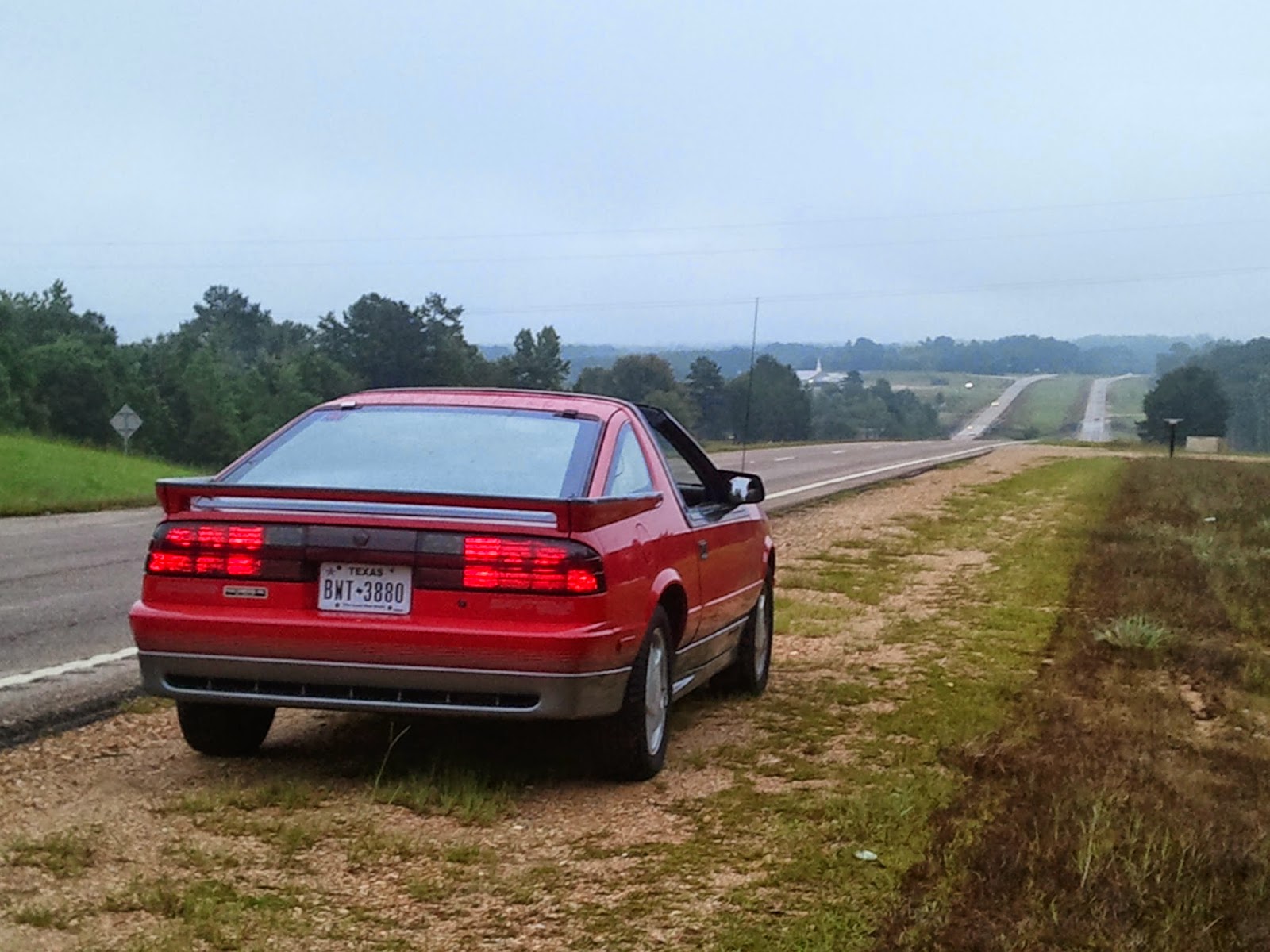 At the top of the BIG Hill.  It's a lot steeper on the East side than the West.  That's the West bound lane to the upper left.  I can almost see my house from up here.

In hindsight I should have just let the Daytona get to the top of the hill, coasting, let it go over the top of the hill then stuck both of my arms out of the tops, shouted "Wheeeeeeee!" as loud as I could and just let it coast all the way down the hill and roll to a final stop somewhere near the bridge at the bottom.

Would have been fun. 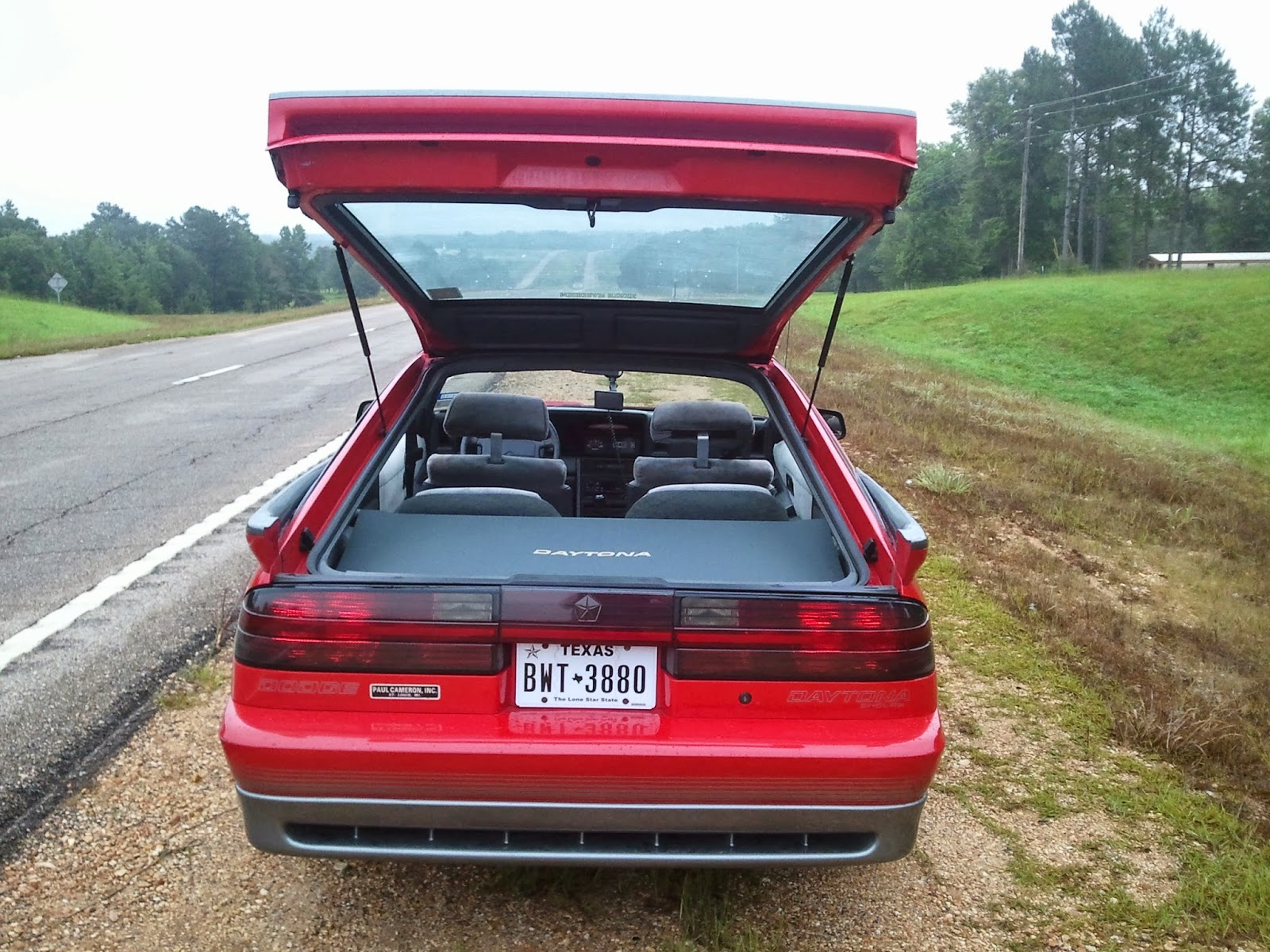 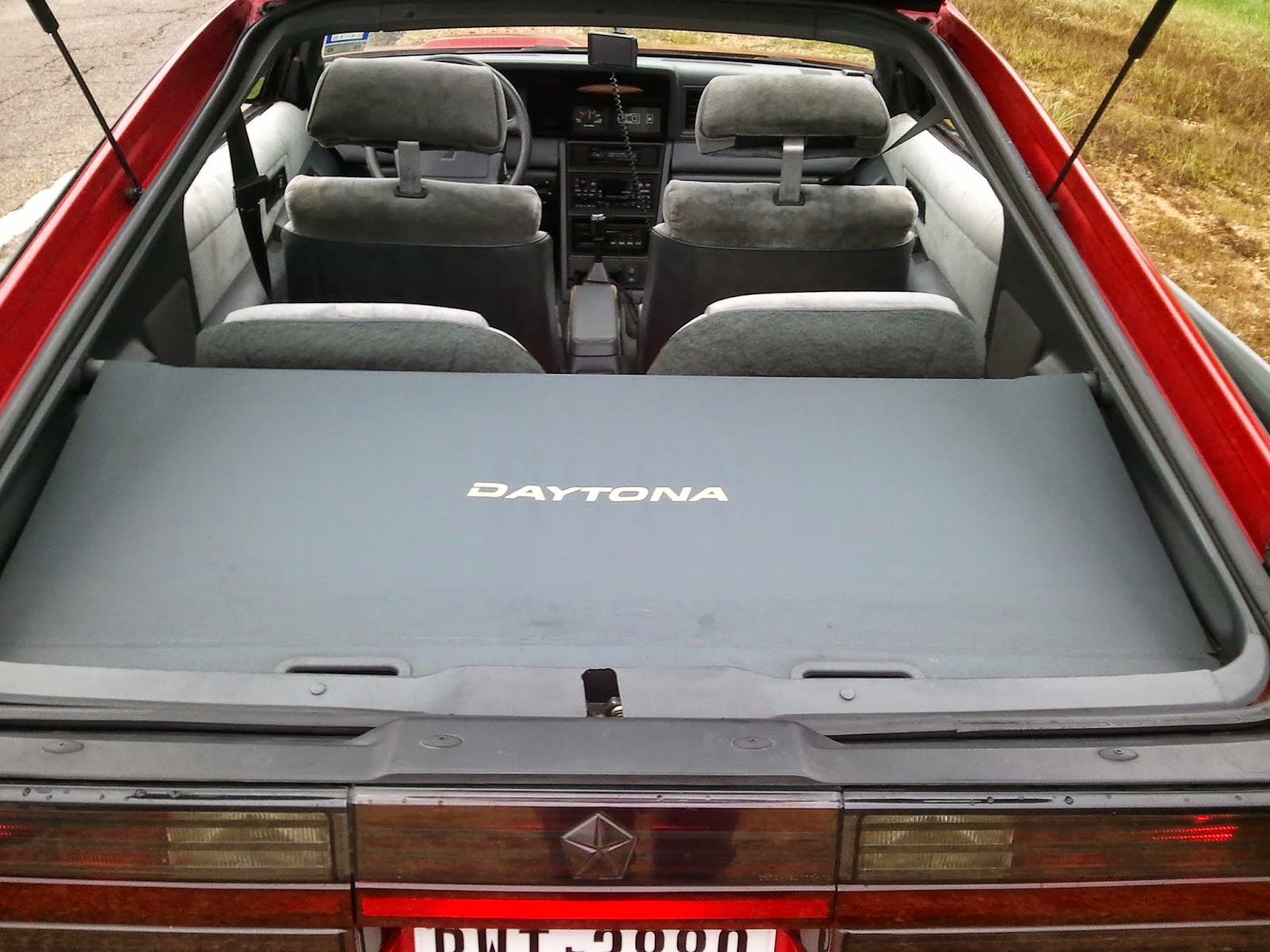 The cargo cover is nice and still works great.  Just visiting the forums I see a lot of people looking for these so they must either be highly coveted or break easy.  Either way, I'm going to take care of mine.   Did I mention that I had swapped out the lift support struts?

The Daytona, however, doesn't work. 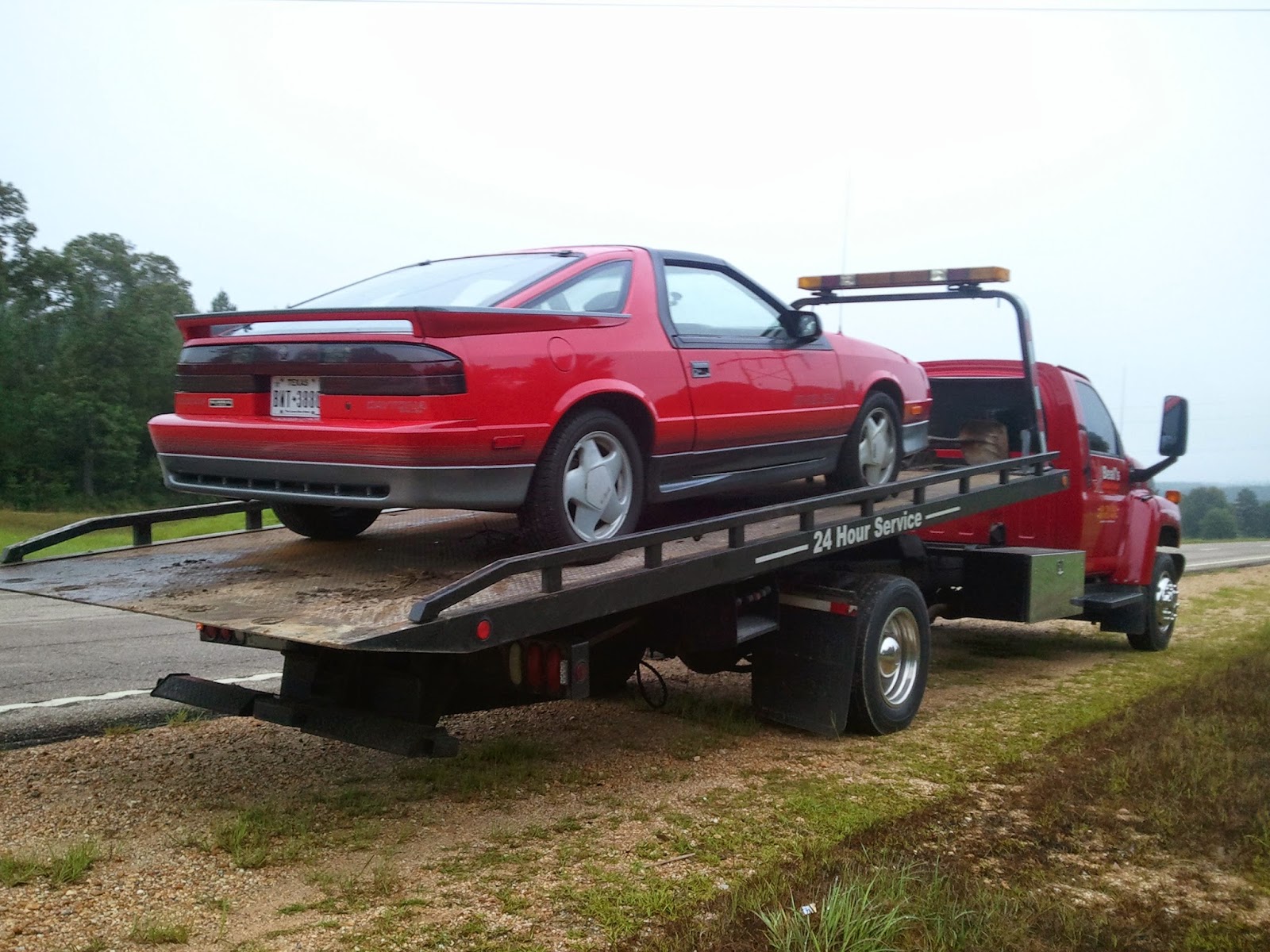 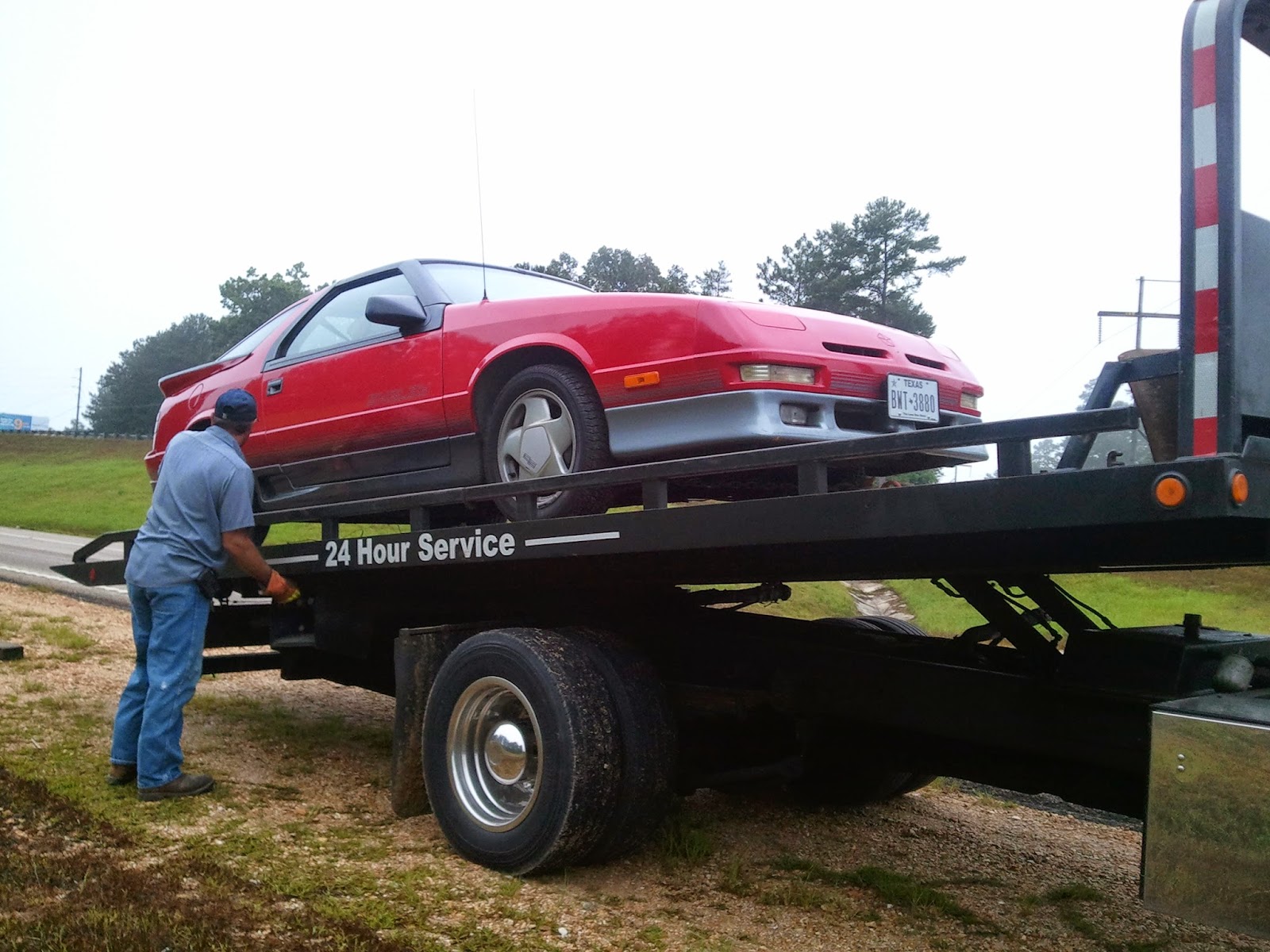 Loading up the '89 Dodge Daytona Shelby.  She goes places ... sometimes with a little help from her friends like Joe and his magic wrecker. 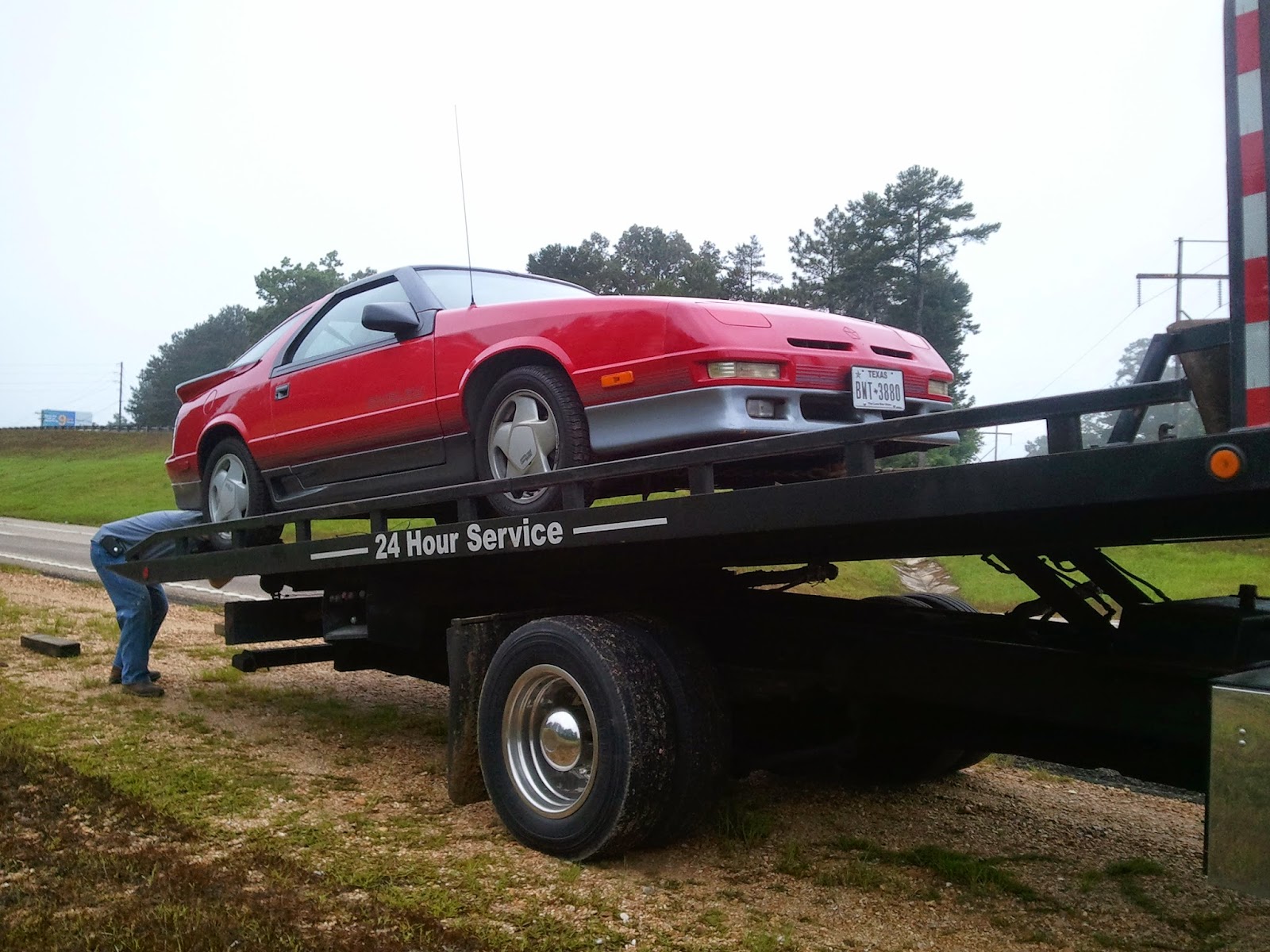 No, I don't think the problem is back there, Joe.  This man puts way more faith in heavy duty chains and winches than I do but then he does this for a living and all I do is send him business either in my own life or through the PD.  Having a Daytona hitch a ride on my back, piggy back style, early in the morning isn't on my list of things to do any time soon.  If one of those chains snaps we'll find a new meaning for the term "roll back". 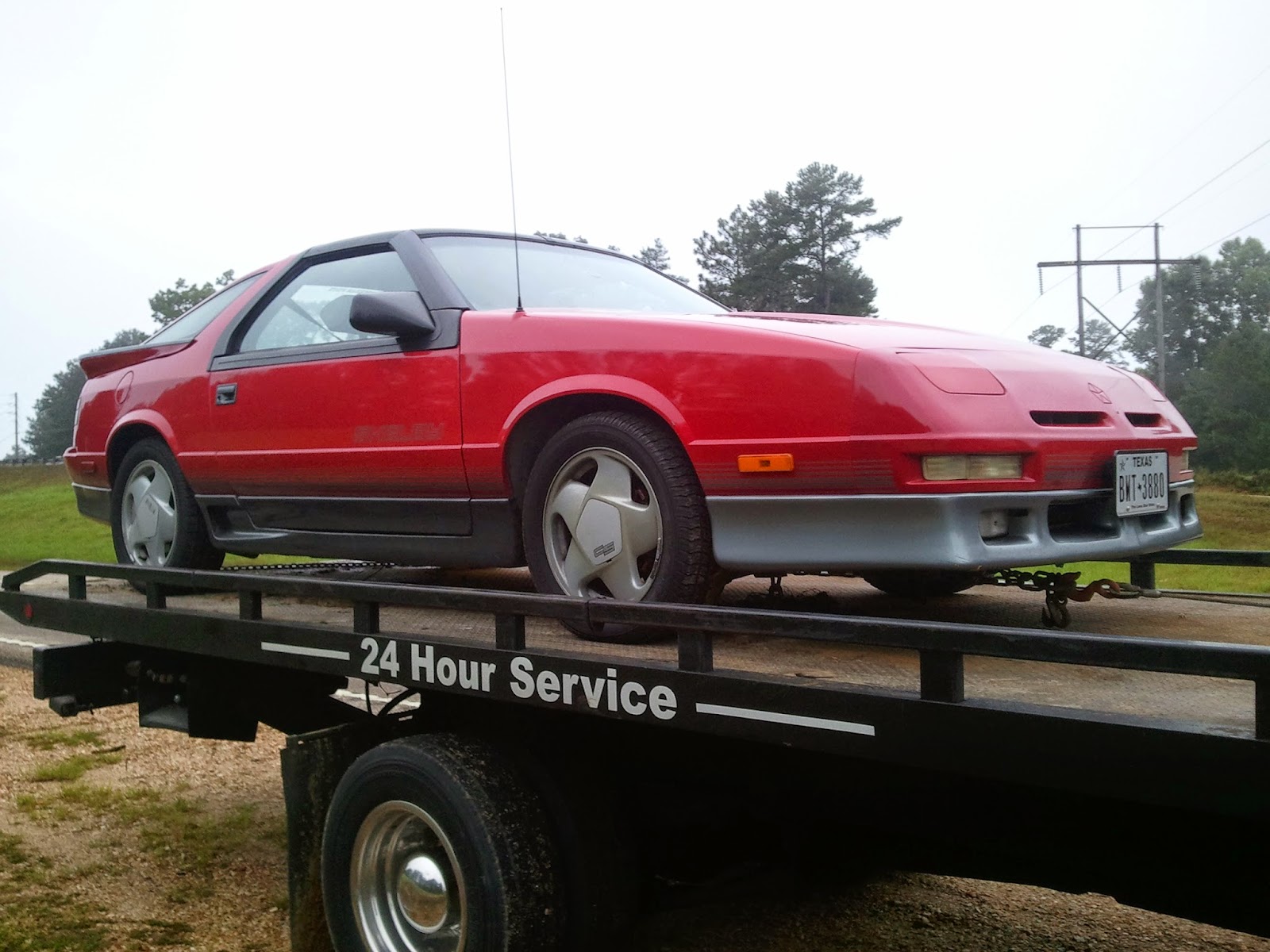 And ... off we go!I'm two hours late to work so I eat that in personal time.  I drop the Daytona off at my mechanic's just as he's getting to work.  When I tell him the problem his expression is priceless.  I wonder how he's going to get the Daytona into his shop since we've unloaded it, dead, in front of his shop and put it in a parking spot.Oh, well.
So ... I leave the Daytona with my mechanic to fix the AC, whatever is keeping her from lighting off and oh, there's a small oil leak under the car.  Fix that as well.  I guess I'm looking at about $500 worth of work ahead of me.  Toys are expensive when you grow up but oh so worth it.

As I finish talking to my mechanic Joe hands me his bill.  A seven mile tow to my mechanic's shop costs me $128.  Henry Rollins is on the floor laughing his ass off.  I hand the bill to my wife and tell her to run that by State Farm since I have towing insurance ... best $2 I spend every month and with this bill I guess the last six and a half years that I've paid for that towing insurance just panned out.

Posted by Christopher T. Shields at 9:08 AM