So ... I get up early, take the wife to breakfast (the kids are at my parents and us time is rare and far between) and we take the Daytona.  It's nice weather outside and the T-tops are on so I just roll down the windows and we enjoy some fresh air.  About a mile from the house there is a thump from under the hood and then ... silence.  My wife asks me what that was because it sounded like we ran over something but I don't see anything in the road behind us.  My eyes flash to the gauges in the dash ... no warning lights, all needles are right where they need to be ... no obvious signs of malfunction and the Daytona is driving fine.

I shrug my shoulders and we drive on.  I'm thinking it might have been a stuck vacuum door in the dash finally opening or shutting or something.  It kind of sounded like a thump from inside the dash.

We have breakfast at Hardees and after sitting and eating and visiting and enjoying each other's company (without children present) we hop in the Daytona and head back home.  It has warmed up some so I turn the AC on ... and I can immediately tell that it is not blowing cold.  Again.  Part of me says "Wait.  It will start to blow cold in a few seconds." but the other part of me says "No.  This isn't normal.  It should be blowing cool air, dense air, different than what it would blow with the fan only."

I run my hand in front of the vents in the dash.

That is not cool, dense air.  That is just regular air, fan forced.

My wife runs her hand in front of the vents.  We had the Daytona out last night, took it to Hattiesburg on a date, ran the AC all the way there and back and it got so cold that we had to turn it down to low just to stay in the Daytona.  In fact, my wife knocked the temp up out of the blue to halfway into the red on the way home because the AC was working so well.

Now it's not working.

The thump under the hood.

One of my drive belts has been making a little bit of noise lately.  My father heard it when I visited him the other day and he grabbed up his can of "Belt-Eze" and sprayed my belts.  Dad doth not like squeaky belts under the hood ... it doesn't bother me that much, mine was barely audible with the hood shut and some belt noise is unavoidable.

Still ... what if the belt had been on its last legs and had finally given up the ghost.  I remembered that I'd looked at all of the belts when I bought the Daytona way back in June and I'd inspected them before taking it on its 700 plus mile journey home.  The belts had all looked almost brand new.

Back in June and July the AC was basically rebuilt from the dash to the front bumper ($$$$$$$) but worth every penny in the humid heat of Mississippi.  I thought I remembered that my mechanic had put a new AC drive belt on at the time so ... was it the belt that had broken?

Thinking that I had a broken AC drive belt to look forward to replacing I took the Daytona home, parked it in the driveway, popped the hood and looked at the AC compressor.  The belt was still on the drive pulley.  Ok, strange ... then what was that thump under the hood.  That's when I noticed that the front of the AC compressor where the clutch is looked ... strange.  Different.  I reached into my back pocket, pulled out my OT200 flashlight and flicked it on.  I could see an exposed thread on the front of the AC compressor and a single washer just stuck on the side of the thread, like it was magnetized.  I shined the flashlight down into the motor and ... WTF is that!?!?

It's some round metal wheel in front of the crank shaft pulley ... just sitting there in what can only be described as one of the best engineered catch basins for parts falling off of a Turbo II engine.  I look closer and it hits me what I'm looking at!

The front half of the AC compressor clutch!

The AC compressor has shed its clutch face and that was the thump we heard on the way to breakfast.  The front face of the AC just ... fell off and down into the area between the fender well and the crank shaft.

I start to laugh.

I really start to laugh.

Then I walk into the house and I'm still laughing.

My wife comes out of the bedroom, confused and asks me if I'm laughing because I fixed the problem or because I found the problem.  I tell her what I found and she follows me back out to the garage and I show her.  While she's holding the flashlight trying to figure out how the AC compressor clutch face came off, I go get my magnetic pick-up tool and pull the clutch face out of the guts of the motor.

Looks like I'll be getting the Daytona back to the shop on Monday.

I'm still laughing and I laugh to keep from crying.  Brand new compressor and it's come apart.  Oh, this better be fixed under warranty ... that compressor can't be two months old. 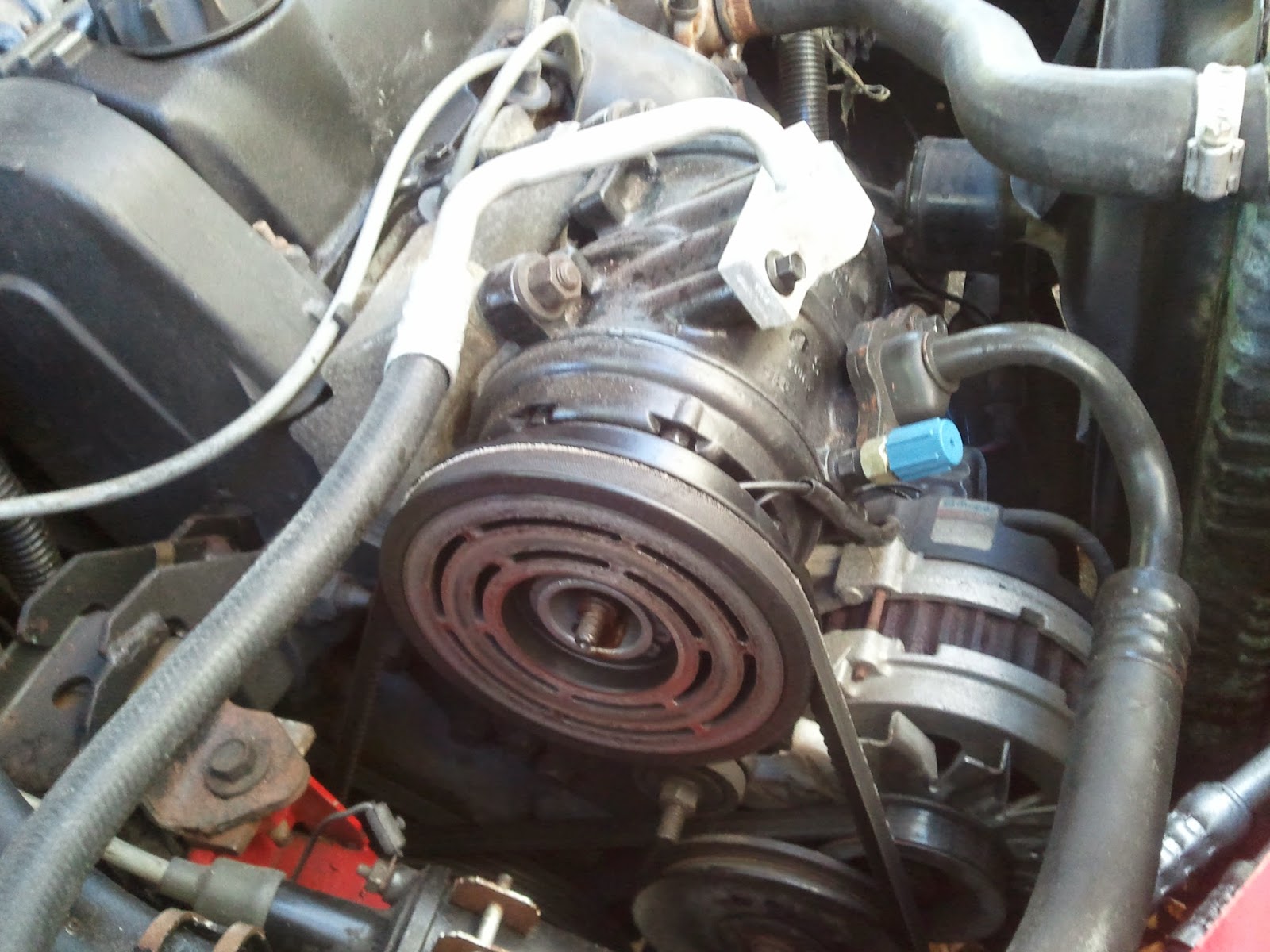 There's a part missing ... a very important part and it's ... oh, it's way down there at the bottom, near the crankshaft pulley. 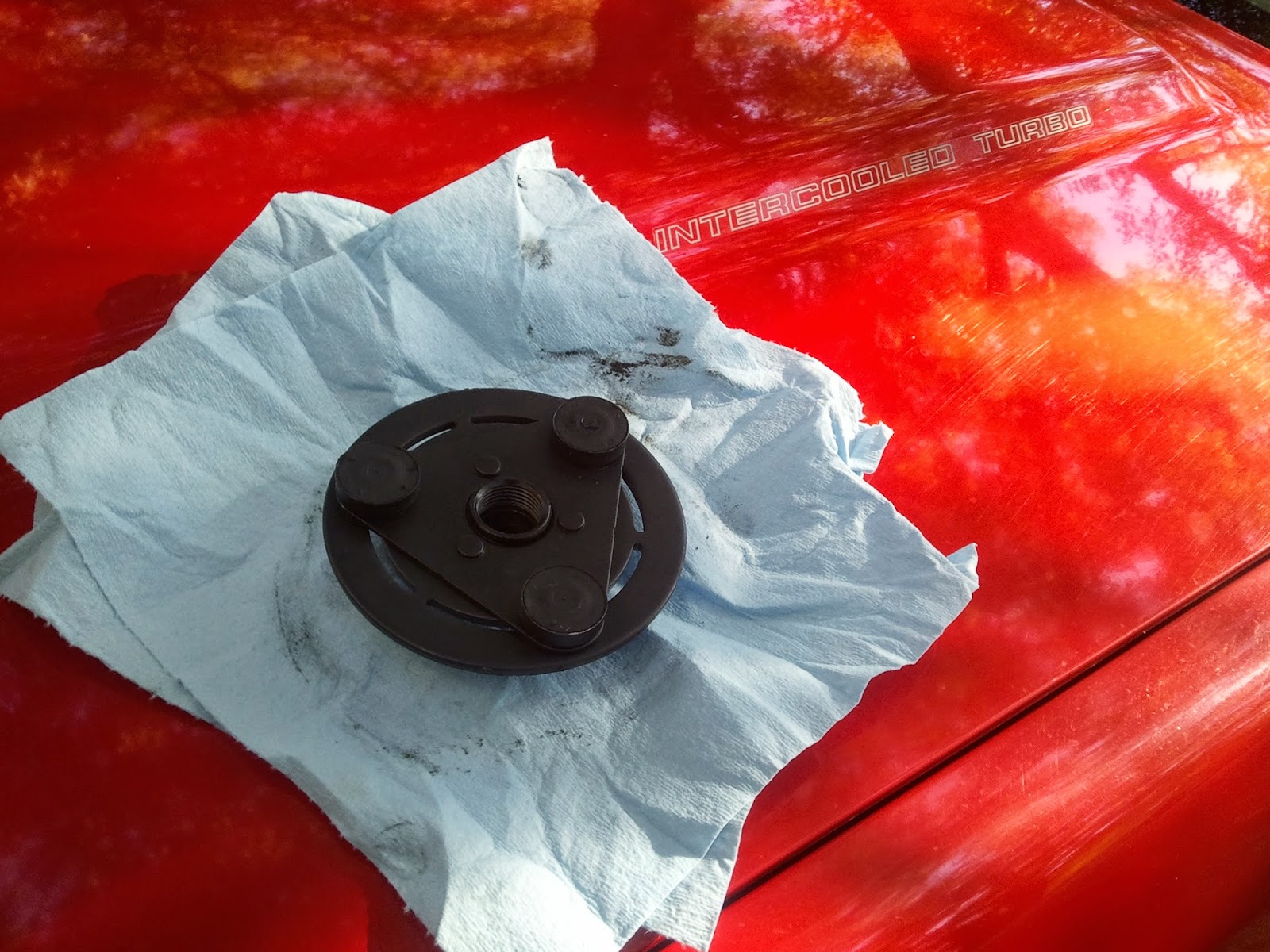 And ... here's the part that just fell off.  Yay.  I'm guessing the compressor was made in Mexico or China.  Oh, well, back to the shop on Monday.  I think this was a record.  I think I had the Daytona in my hot little hands and on the road about ten days, maybe, before it had to go back in the shop.

Posted by Christopher T. Shields at 8:33 AM